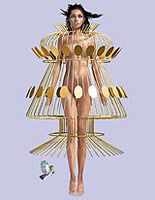 Predicting the future has always been a tricky business. From the 1950s’ fears of intergalactic annihilation, to the 1970s’ predictions of leisure-filled third millennium lifestyles, our trend predictors consistently get it wrong, and they’ve done it big time with the Web.

Just five years ago we all thought we’d be doing our grocery shopping from home, real-world bookshops would be rarer than a good performance on Pop Idol and social functions would consist of eight ‘saddos’ in a chat room. So what’s happened? The recession, of course, but other factors have played their part too; consumers remaining wary of Web transactions, continuing problems around delivery, overpriced high-speed access and, ultimately, a massive over-expectation of what e-commerce was to begin with. On top of all that, of course, the sites themselves are often unwieldy, slow, hard to navigate and downright ugly, which is where designers come in.

Design’s role in e-commerce is a double-edged sword: on the one hand, designing a site whose function – literally selling stuff – is specific and, therefore, arguably simple, and on the other, finding the rigorous commercial aspects of the site outweighing all other considerations.

But there are exceptions, and they’re often designed not by digital media groups, but traditional designers and sometimes even architects, who bring their expertise and knowledge of other disciplines to bear on the project. One such example is Italian discounted designer clothing site Yoox.com, www.yoox.com, which was founded last year by Federico Marchetti. ‘The site champions the best off-season clothes and accessories from the most prestigious international brands and brings them to the virtual marketplace with discounts of up to 75 per cent,’ says Marchetti.

Created by Studio Radiosity, a Milan-based architecture and design group that has worked with Benetton’s Fabrica, Yoox is an irresistible site that works on every level, from interface design and aesthetic appeal to navigation and functionality. Its visual strength, believes Yoox director of communications Holly Brubach, ‘lies in the fact that both Radiosity directors Alessandro Guerriero and Alberto Biagetti trained as architects, which is to say that they approach fashion as “outsiders”. Consequently, Yoox has neither the look nor the feel of a “fashion site”, and that makes it more interesting because it’s using a different language to sell fashion.’

Biagetti puts the site’s success down to client and architect’s shared boldness of vision and experimentation. ‘Yoox is an unusual type of client, able to accept risky projects. When it came to developing the site we both wanted to create a “place” – a sort of room full of wonders. It’s not that different to designing a real-world store; this store is only different in that it can’t be physically touched. And because it’s designed as a multifaceted company, created as a global system in order to be close to its users, its design succeeds where others’ sites, many of which seem to be based on stereotypes of e-commerce and of communications, might fail,’ he says simply.

By maximising the advantages of interaction, personalisation and technology, and coupling them with some genuinely good last season bargains from the likes of Prada, Gucci, Alberta Ferretti et al, Yoox seems set to go from strength to strength. Check out its newly launched vintage wear section and you’ll see what I mean.

Closer to home another market is experiencing something of a boom, for when it comes to eyewear, people are more than happy to have lenses and solutions delivered directly to their home for around 30 to 50 per cent less than high street opticians’ prices.

Iris Online, at www.iris-spectacles.co.uk, found this when it launched its contact lens site in May 2000 (since the launch, it has made around 10 000 on-line sales), but last year it added a frames and spectacles service on a beautifully simple and navigable microsite, that is, against the odds, also doing well. Chief executive officer Spencer Scher won’t reveal figures, but he does admit surprise at people’s willingness to buy specs on sight alone.

Key to the business success though is that people don’t have to buy frames on sight, or, indeed, on site (there’s a London store for trickier lens requirements). If you live in a part of the country where the latest Alexander McQueen and Vivienne Westwood frames are hard to lay a hand on, you can order trial pairs from Iris and return them if you don’t like them.

Iris carries a small, but carefully selected range of designer frames, and thanks to the clear Macromedia Flash-based scrolling functionality, browsing through them is a lot of fun. The interface, by London group The Family, is uncluttered, warm and very clear, something that Scher believes came about through a close relationship between client and designer.

‘I wanted something kind of gentle, organic and unmedical. I didn’t want unnecessary buttons and gizmos, just a straightforward graphic user interface backed by great functionality – a simple, but intelligent piece of design that acts as a strong brand indicator for a company that’s contemporary and youthful.’ The branding is emphasised by the packaging, stationery and accessories – everything carries the simple, but effective, logo and URL.

Branding, of course, is key to any strong e-commerce Web proposition, as BamberForsyth Fitch discovered when it recently relaunched Fortnum & Mason’s on-line presence at www.fortnumandmason.com. As project leader Mark Wilson explains, ‘The key challenge was to develop a visual language that carried the heritage of a 300-year-old retail brand, yet allowed us to deliver a modern and appropriate e-commerce site. We created a visual language that was extremely sensitive to the brand’s core assets of heritage, quality and luxury: the site feels like an indulgence. The written tone is highly appropriate and the core typeface is an old cut of a face used in the 1930s.’

While the Fortnum & Mason site is likely to still be going strong in another 300 years, many sites won’t be. They’re the ‘cluttered, unfocused ones with no clear purpose, audience targeting, or distinctive brand language. The ones with terrible navigation design, lacking consistency and clear rules for the user,’ says Wilson boldly. And while I’m not much of a betting person, that could be a trend prediction that could, for once, be absolutely spot on.