The Belgian government has revealed a new passport, which honours of the “jewels” of the country’s culture: comic strips.

The new document has been designed by French design and engineering consultancy Thales Group and Belgian tech company Zetes.

According to Belgium’s Ministry of Foreign Affairs, the document has been developed “in close cooperation with anti-fraud specialists of the Federal Police”.

It may not come as a surprise that Belgium has chosen to highlight its comic book lineage – an artform where it has held international influence over much of the last century.

In Belgium and France (the two countries share many cultural links in the sector), comic books are often seen as the “9th art” alongside more traditional forms such as film and architecture.

Hergé’s The Adventures of Tintin – which depicted the capers of a young newspaper reporter and his faithful white Fox Terrier – was first published in a Belgian newspaper supplement in 1929.  Since then, his adventures have been translated into over 110 languages.

As arguably Belgium’s most famous export, Tintin’s influence is immediate in the new passport. Professor Calculus’ red rocket, which first landed in Explorers on the Moon and Destination Moon, makes an appearance on the inside cover of the passport. Later, Tintin, his dog Snowy and companion Captain Haddock can be seen exploring.

The Smurfs also pop up. First created in 1958 by Belgian comic book artist Peyo, the little blue creatures live in mushrooms in the woods. In the passport, a travel-hungry Smurf can be seen studying a globe. Another Smurf is seen on the back pages, strolling across the Earth.

More characters such as Spirou, Spike and Suzy, and British adventurers Blake and Mortimer can also be found. Appropriately enough for a passport, they are often exploring foreign lands or visiting famous monuments.

Though character’s outlines are visible to the naked eye, more details are visible under UV light. Hidden layers can also be found throughout the passport; one reveals Tintin in his astronaut suit floating through space.

The foreign ministry has worked with several publishers and rights holders to use the much-loved cartoons throughout the passport. The comic book theme even extends to more subtle features, such as page numbers which are contained in speech bubbles. 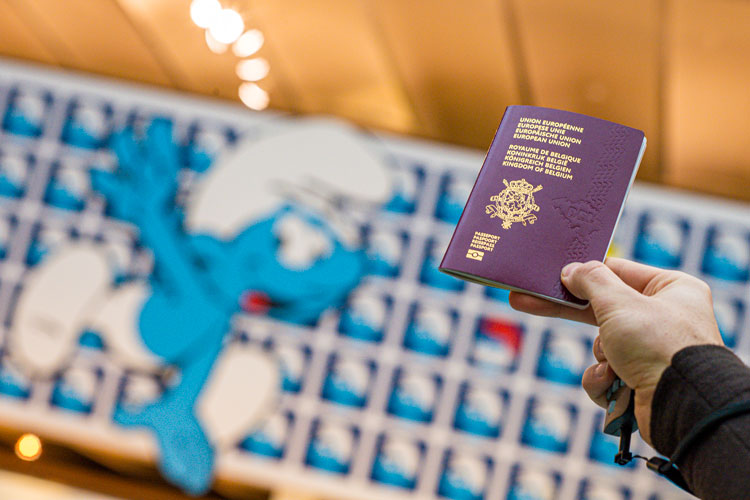 Deputy prime minister of Sophie Wilmès says that the new design was a chance to “highlight the 9th art, the comic strip, which is a central element of our culture and our influence abroad”.

She also welcomed the security updates, adding that the passport is an “object of desire for counterfeiters” thanks to the number of countries it allows users access to.

The new design will be available from early February this year, and all previous passports will be valid until their expiry dates.

To coincide with the passport’s redesign, there were an exhibition on the history of the Belgian passport at the Comics Art Museum in Brussels. It runs from 28 January – 6 March 2022.

What do you think of the new passport design? Let us know in the comments below.