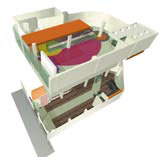 If successful, the concept is likely to be rolled out across Etam stores nationwide. The work comes as the company moves to distinguish its Etam and Tammy brands, says Etam head of store environments Steve Lees.

Etam’s revamped interiors are ‘more of a leap’ than Tammy, which will become more ‘industrial and fun,’ says Lees.

Path director Tom Redpath says the consultancy was briefed to create two distinct identities for the Etam and Tammy brands, which are ‘usually combined’. The store interiors are an evolution of existing designs but reflect the bolder nature of the new building.

‘We wanted to maximise the opportunities with the scale of the store because the nature of the Bullring space lends itself to a more dramatic interpretation,’ Redpath says.

The site is a double-height store and the Tammy section will be reached via an escalator that will be glazed and backand underlit. The group is also introducing a revamped colour palette and more audio visual elements designed to appeal to Etam’s teenage target audience.

Path was appointed on the strength of a long-standing relationship with the client.

Birmingham’s Bullring, with 132 retail units and a city square-style layout, is one of the largest retail-led regeneration projects in Europe. It includes Selfridges’ futuristic, new Future Systems-designed department store.

Pentagram has received sign-off on its signage concepts for the development, says a Pentagram spokesman. The signage will be unveiled in early September.

Age no longer of concern