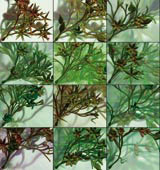 This isn’t a mere moment or a passing fad. Decoration is suddenly everywhere around us. After years of minimalist rule, ornamentation is no longer perceived to be a crime. In design, art and fashion, pretty shapes and motifs are taking over rigorous lines. Luxury, profusion, sometimes even an excess of materials are stating the case for the return of sensuality.

The most sumptuous example of this decorative aesthetic could be found at this year’s British Pavilion at the Venice Biennale, where visitors gaped at the sheer beauty of Chris Ofili’s art installations. Ofili, infamously known for the use of elephant dung in his paintings, is a master at saturating his work with multicoloured dots, decadent gold paints and afrocentric imagery that to European viewers seem to border on the exotic.

Cut to the latest Royal College of Art degree show and everyone is talking about textile student Paul Goddard’s Rococo Dangerous Ejaculation Collection, in which semi-porn images masquerade among a forest of intricate embellishments. Look closer and the sexual theme becomes clearly visible, but beautiful in a decadent and lascivious way.

Highly decorative elements in this country are, of course, nothing new. They have a history that goes way back to William Morris and the Arts and Crafts Movement, passing through the Pre-Raphaelites and Art Nouveau. In 1985, a young Peter Saville was lifting French embroidery images for his Talking Loud and Clear by Orchestral Manoeuvres in the Dark record cover. So what makes it so relevant this time round?

According to Design Museum director Alice Rawsthorn, the return of decoration in design ‘is partly a cyclical shift because, inevitably, first designers and then consumers grew bored with minimalism. But the new romanticism isn’t simply a revival of the old “arts ‘n’ crafty” aesthetic, it is a combination of ornamentation and technology. The best examples are produced by designers who – like Tord Boontje and Hella Jongerius – harness advanced technologies to mass

-manufacture work with a level of richness and intricacy that could hitherto only be achieved by hand-craftmanship’.

In digital media, Daniel Brown’s startling digital flowers bloom and blossom with extraordinary precision. This is the very antithesis of what digital media is perceived to be – a cold, Web-based experience for the sake of nerdy users. View his work in a large screen installation, and you can’t help being emotionally touched by it.

Boontje, who showed with Brown at the British Council and Design Museum’s exhibition Great Brits this year in Milan, is also a representative of the decorative school. The shortlisted Designer of the Year uses ornamentation closely with new technologies when designing his products. His computer laser-cut devorÃ© silk screens go hand-in-hand with pretty animal patterns, while his floral iconic Wednesday light is a mastery of intricate photo-etching technology.

‘Both Boontje and Brown belong to a generation of designers who grew up with technology and feel completely comfortable with it. Their work and influences are very different, but both harness advanced technologies to produce rich, romantic work often inspired by nature,’ says Rawsthorn.

But it is with the unlikely medium of print that decoration has become diffuse. Contrasting the lasting reign of the Swiss-inspired school of thought, graphic designers are increasingly abandoning themselves to representational figures, repeat patterns and kaleidoscopic colours. British Council head of design Emily Campbell says decoration in graphic design functions almost like a narrative. ‘A lot of decoration is made of repetitive symbols, archetypes, floral imagery,’ she notes. ‘It tells a story.’

Frauke Stegman, a Namibian designer of German descent, loves to apply her obsession with birds on to anything she can get her hands on, from personal projects to invitations such as the one she designed last year for Jarvis Cocker and Camille Bidault-Waddington’s wedding in collaboration with Peter Saville Associates. For Stegman, birds ‘are a very positive symbol’, she says. ‘They are harmonious, and being so far from home they give me a feeling of hope.’

Hazel Rattigan, one part of duo Value and Service, also loves to experiment with textures and printing techniques, Having worked with David James for high-profile fashion clients like Prada, she is no stranger at playing with luxurious elements. An invitation printed on facsimile Vogue glossy paper and stationery embellished with pretty symbols for fashion stylist Lara Scott illustrate her aesthetic.

The Design Museum’s new identity by Graphic Thought Facility features an illustration by Kam Tang. His highly ornate signature style has made him a favourite of many art directors like Tony Chambers, creative director at Wallpaper, who has commissioned him for the July/August front cover. ‘What is refreshing about Tang’s work is that it feels very modern, yet is steeped in the tradition of Japanese Art. Even though his drawings are rendered by computer, he hand-draws first – that’s why it feels so right. There is a nod to the past, but it’s also very now,’ says Chambers.

It is highly representative that a magazine like Wallpaper, which pioneered the use of digitally generated line drawings in the mid-1990s, is now embracing decoration. Other names who are employing a Biba-style, 1960s hippy aesthetic is illustrator-turned-fashion designer Julie Verhoen, as well as Lizzie Finn, the hands behind Moloko’s latest album cover.

As Chambers says, part of this trend is inevitably due to fashion. ‘As humans we are all subjects to the whims of fashion and it is true that now decoration is deemed more acceptable.’ But the style of today isn’t just about retro nostalgia. ‘It is now married with a more rational approach – having gone through a functional phase, the two [design currents] have merged; it’s healthier, they sit next to each other more comfortably,’ he says.

Packaging is toast as you buy a model off the shelf