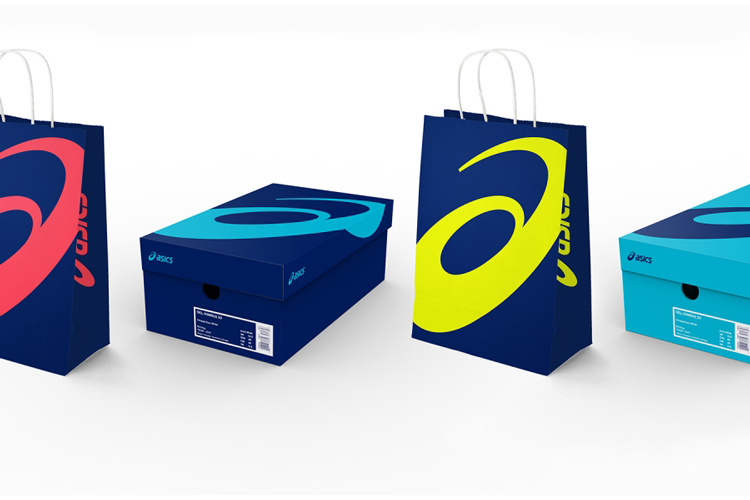 Sportswear has become more fashionable in recent years, with the likes of Nike, Adidas and Fila gracing more shop windows and partnering up with clothing brands such as Urban Outfitters and Asos.

As the boundaries between casual, lifestyle wear and sportswear have blurred, specialist sports brands have had to adapt to keep up with expanding audiences.

In keeping with this trend, specialist running shoe store Asics rebranded this week, taking on a more colourful look that looks to be less “clinical” and “technology-focused”, and more celebratory of “the joy of sport”.

Created by Bruce Mau Design, the new look keeps Asics’ classic swirl logo, but adds an extended typeface and a bright colour palette, alongside photography that aims to capture people’s “stories”, not just the “climactic” moments of winning, according to Chris Braden, creative director at Bruce Mau Design.

While the studio says the brand is still focused on “dedicated” sports people and serious runners, it is hoping to branch out to “those who see sports more casually”, too, in a shift that will see Asics look to make trainers suited to “socialising” as well as partaking in sport.

Asics is yet to announce any new product launches in line with the rebrand. The new branding is currently rolling out across packaging, print materials, online and store interiors in the UK, then worldwide. 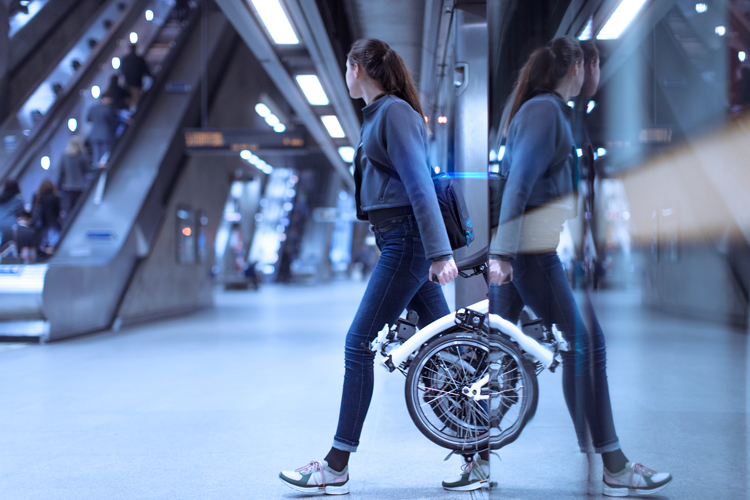 There has been a push by UK Government in recent years to tackle pollution and city workers’ sedentary lifestyles through cycling initiatives.

Transport for London’s (TfL) announced its latest scheme this month, which is offering £300,000 in grants to 30 local community groups in a bid to encourage people to cycle to work. This includes training, maintenance and loan bikes for beginners.

It is no surprise, then, that bike manufacturers are jumping on the trend of encouraging more people to ditch the car for the bike.

Brompton Bicycle, the UK’s largest bike manufacturer and creator of the folding bike, announced this week that it is launching an electric model, with an accompanying smartphone app.

The Brompton Electric has a detachable battery, which can be carried separately from the bike when folded and which allows the bike to travel a distance of 25-50 miles on one charge.

The app allows users to track their distance and also keep an eye on their bike service history.

Electric bikes help to cut pollution, and require less effort to power, meaning they are accessible and easier to use for a wider range of people than regular bikes. TfL is currently providing an additional £3,000 for communities wishing to use electric bikes for this very reason.

Will Butler-Adams, CEO at Brompton, says the new bike aims to “inspire more people to get out from under the ground and their cars, and back onto a bike to rediscover their cities”, and also help commuters “go further by bike without breaking a sweat”.

The bike is currently available for pre-order online, and will be delivered in early 2018.

Government figures revealed a jobs boom in the design industry

The latest figures released by the Department for Digital, Culture, Media and Sport (DCMS) this week reveal that the creative industries are employing at four times the rate of the UK workforce as a whole,. The design industry in particular employs 60,000 more people than it did six years ago.

With this, there has also been a rise in ethnic diversity, with design employing 5,000 more people from BAME (black, Asian and minority ethnic) backgrounds in 2016 than it did in 2011.

But Matt Hancock, creative industries minister at DCMS, says there is “still more to do” before diversity in the sector “mirrors that of society as a whole”. Despite the increase, 91% of the design workforce is still white, while there is also a disproportionate number of men at 60%.

Government lobby group Creative Industries Federation has previously commented on diversity in the creative workforce, saying that “headline statistics are worrying”, adding that their policy work “focuses on diversifying the workforce”.

Hancock also spoke recently at the Federation’s international conference on the need for industry professionals to take diversity into their own hands, by asking them to “ensure they reach to all parts” of the UK when seeking new employees to give “everybody the chance to make the most of their lives”. 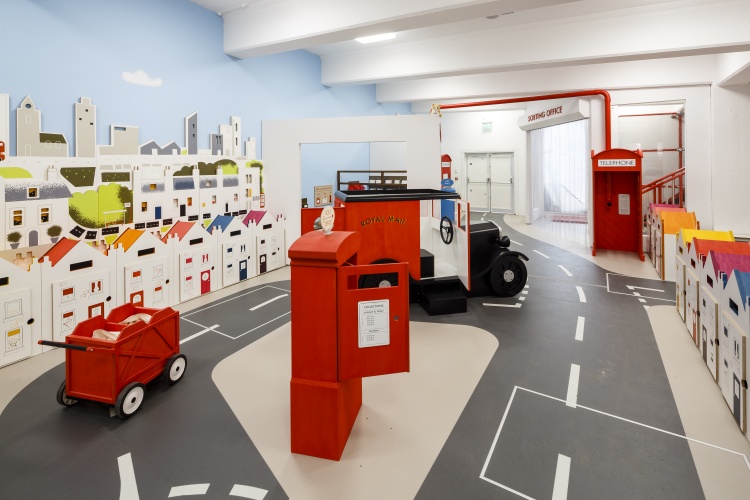 Self-described as an exploration of the UK’s “first social network”, London’s new Postal Museum opened this week, allowing visitors to delve into the history of the nation’s post delivery service.

Based within a disused printing factory in Clerkenwell, the permanent exhibition explores the last 500 years of the service, including artefacts such as a gold-coloured postbox from the 2012 Olympic games, through to the sculpture of Elizabeth II which was used to form the image seen on stamps.

Alongside this, the museum features an interactive, Mail Rail experience from September, where visitors will board a miniature train that will take them through the original, underground tunnels used to transport post.

The cute, colourful exhibition areas have a model village feel to them, with makeshift post offices and boxes, old-fashioned black cabs, trails of terraced houses and roads all incorporated into the space.

The retail areas, including the shop and café, designed by global consultancy M Worldwide, also have a feel of the kitsch and antiquated, with parcel tags and hand-written letters hanging from the ceiling alongside special edition stamps adorning the walls as posters, and the use of early 20th century postal depot materials such as wicker, brass and cotton. 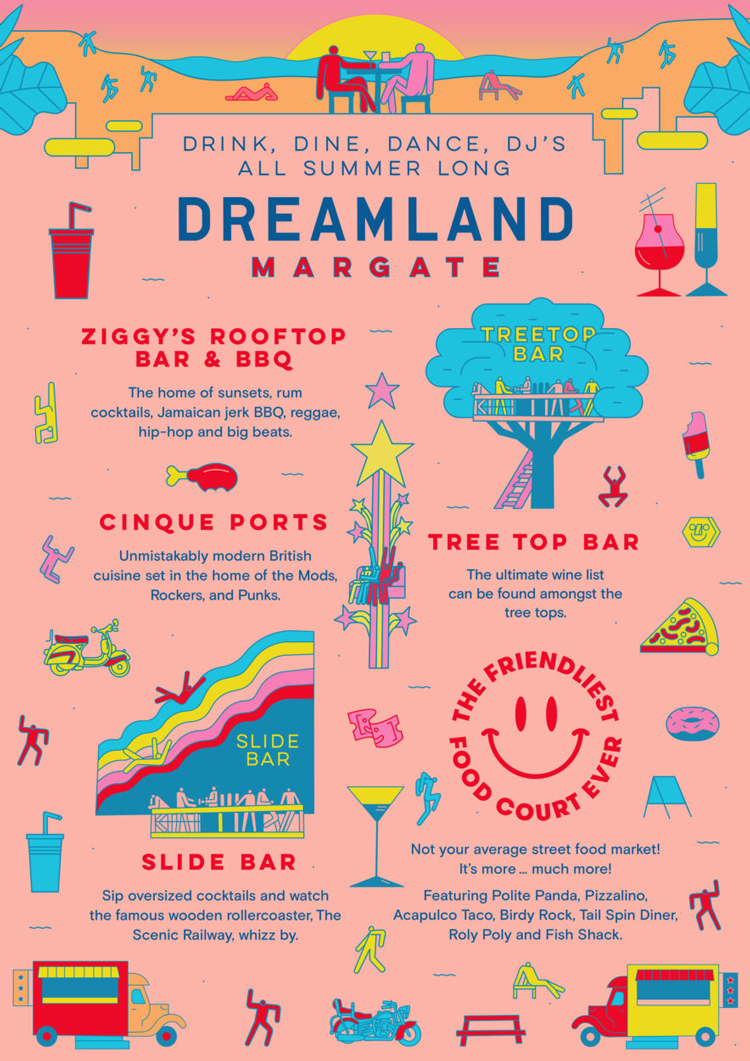 Theme parks are most often associated with stock photography of perfect-looking families, dodgy water splash and haunted house imagery, and variations of exhilarated, terrified and generally hilarious faces being pulled on rollercoasters.

Dreamland Margate, however, has looked to differentiate itself from its competitors by avoiding the clichés associated with attraction parks.

Originally launched in the 1920s, the park was open for over 80 years before closing in 2005. HemingwayDesign then brought the brand back to life in 2015 when the park reopened – this was shortlived, however, as the park then went into administration in 2016.

Following a £25 million investment, the park will stay open, and Studio Moross has revealed a brand new campaign and look for Dreamland Margate.

The studio took on an illustration-led approach, says art director Kate Moross, collaborating with illustrator Mica Warren to create a “fun and weird” campaign that is aimed at all demographics, “whether they are five or 45”.

The campaign has kickstarted a wider redesign of Dreamland Margate’s visual identity. While HemingwayDesign’s original logo will remain, the visual campaign is expected to “evolve and change” each year, according to Moross.