Tactile and friendly, characters have long been the mainstay of design for children. But their broad appeal and warmth is allowing them to populate new worlds.
Lisa Hassell, creative director of illustration collective Inkygoodness, says, ’What may have once seemed whimsical or childish is now penetrating the mainstream, with studios such as Passion Pictures and Studio AKA creating campaigns for Compare the Market and Lloyds TSB, with characters tailored to the adult market.’

Peter Thaler, the founder of Berlin-based character design festival Pictoplasma, attributes the past decade’s boom in characters to the birth of the Internet. Unable to support pixel-rich photography, the early Web used avatars to depict non-language-specific expression. Says Thaler, ’Initial characters were cute and smiley.

There was this utopian belief that you could communicate globally and now there was a technological way to do it.’

By 2004, when Thaler co-founded Pictoplasma with Lars Denicke, character design’s initial optimism had been marred by the burst of the dotcom bubble, resulting in a rebellion of darker, mutated figures. ’It was the pubertal age of character design,’ says Thaler.

But what began online has now firmly rooted itself in the offline word. The growing popularity of designer toys, whether vinyl, paper or one-off objets d’art, is leading to character designers earning large-scale, physical commissions. For instance, game designer and Pictoplasma speaker Keita Takahashi is creating a children’s playground in Nottingham inspired by his video games, for gaming festival Game City.

Hassell says, ’Many character designers now describe themselves as multi-disciplined, crossing over between animation, illustration and set design.’

But the nature of characters continues to follow the mood of the public psyche. Over the past few years, Thaler has spotted increasingly spiritual character worlds.

Lots of characters are seen exhaling their souls, with crosses in their eyes, or deeply involved in rituals. Perhaps it’s a response to us having been at war again, especially as it’s been a war that’s been communicated with religious overtones,’ says Thaler.

Illustrator Nathan Jurevicius agrees, ’A lot of artists – including myself – are looking to nature and spiritualism for inspiration.’

Jurevicius’ multi-platform project Peleda is self-initiated, and draws heavily on the folklore of his Lithuanian heritage. Its protagonists have a look inspired by handmade puppets, stop-motion animation and wooden toys – a popular aesthetic at the moment. Its narrative, which is centered around a spirit-filled world devastated by an evil owl queen, builds up with every subsequent client commission. The project began with an exhibition and commission from New York’s Toy Tokyo to produce a series of wind-up owl toys, but has since spiralled into a rich universe of plush toys, skate decks, a series of short films and a multi-player online game currently in development for Australian broadcaster ABC.

Strong narratives need not just be drawn from the imagination. Illustrator Joel Millerchip’s obsessive use of his sketchbook creates a backlog of real-life stories, which lie dormant waiting for the right commission.

After reading a local news story of a Kent woman’s abnormal collection of garden gnomes and hearing an anecdote about gnomes being used as an underwater marker for deep-sea divers, Millerchip began playing with ideas. When a project designing flyers for drugs awareness campaign Talk To Frank for St Edmundsbury Council and The Matthew Project came up, Millerchip grabbed his opportunity, creating four gnome-like characters inspired by ketamine, cannabis, legal highs and alcohol. ’The idea behind it was when you see lots of “winos” scattered around the park, like gnomes in a big garden,’ says Millerchip.

The gnomes include Clarence the Sponge, a drunken rhomboid and Easy Rider, a ketamine-fuelled jockey. Spaced-out Friday Night Joe, the legal highs mascot, was inspired by a friend of Millerchip’s dad.

Spencer Wilson, who has created characters for the likes of Honda, Tesco and the Southbank Centre’s Imagine children’s festival, also takes inspiration from the real world, including fellow train passengers or the quiff of a colleague.

His characters exude personality through their human-like posture or an inflection of the eyebrow – a trademark of Wilson’s characters inspired by the mannerism of a university friend called Andrew. He says, ’My characters have no white on the eyeball so it can be difficult to get emotion, but it’s surprising how much you can get with the flex of an eyebrow.’ 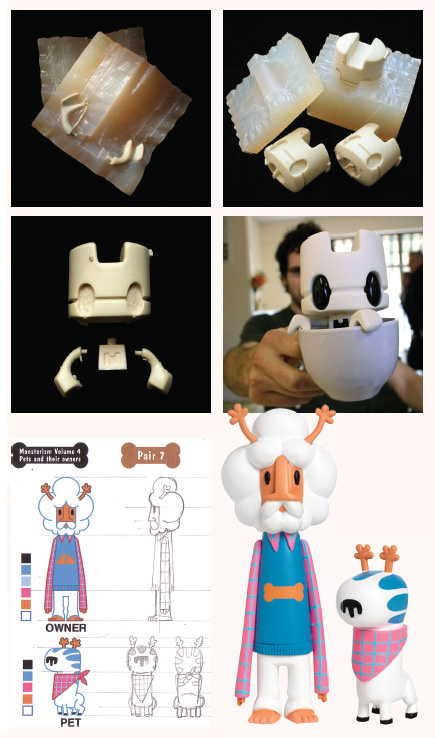 Pete Fowler designs and distributes his vinyl Monsterism toys (pictured at the bottom of the page) himself rather than through a toy company, an eventually profitable exercise that sees earnings trickle in after a six month-long production process.

Fowler relies on his years of life-drawing to create the sketches he supplies to the manufacturers, which must cover the model from every angle. He says, ’Being able to draw a character from the front is all well and good, but what about a three-quarter view?’

Challenging views are tackled by drawing from clay models and, once tightened up on the computer, he sends his designs to ethically sourced Chinese factories.
Matt Jones, the product designer behind the Lunartik in a Cup of Tea toys, tends to use a resin casting process (pictured below), making a master model and then a silicon mold to produce a small army of toys.

He has also started using rapid prototyping and can see a future in which manufacturers sell the CAD data as opposed to the real sculpts, for people to paint themselves. ’The future will be more focused on 3D home printing, which soon will be cheap enough for mere humans to own,’ predicts Jones.

_How to give a character personality

’It is always in the eyes and mouth,’ says Laurens Schellekens of Netherlands-based character design duo Loulou & Tummie. ’Draw squinty eyes and a tiny smile and it’s instantly cute.’

Small heads on a large torso give the impression of strength, but also stupidity. The opposite creates cute, vulnerable characters, according to Schellekens. For Pete Fowler, it is important to develop a narrative to support a character’s personality. He says, ’When I create characters I start asking, “who would they live alongside and where would they live?” They seem to be almost homeless before that.’

MPs say public spending cuts could be ‘disastrous’ for the arts

Ripples sculpture to be installed in south London

We Made That creates National Trust drawing room