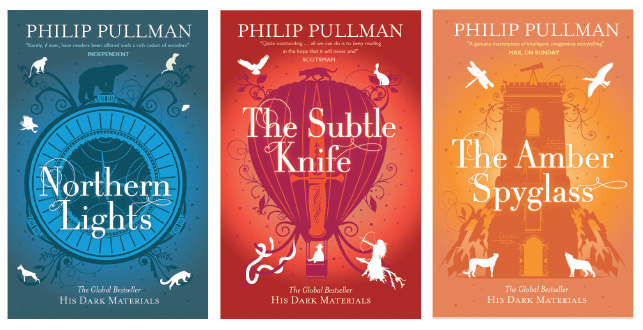 Crush Design has created new covers for the His Dark Materials trilogy of fantasy novels by best-selling author Philip Pullman.

The consultancy was appointed by publisher Scholastic in December 2010 on the strength of its portfolio, says Crush creative director Carl Rush.

Crush was originally commissioned to create the cover of the first title, Northern Lights, in time for World Book Night at the beginning of March – an incredibly fast turnaround for a book cover, says Rush.

The Northern Lights commission led to the rebrand of the other two books in the trilogy, The Subtle Knife and The Amber Spyglass. All three titles will be on bookshelves in April.

Rush says, ’The designers in the studio who worked on the project had all read the books and loved them so it felt like an important and exciting commission.’

Crush created four different ideas for the covers, each with a different feel and approach, says Rush.

He adds, ’Our aim was to present a new approach for the cover designs, which historically had always been photographic or hyper-real illustration.’

The covers feature key objects from the book, such as a hot air balloon and an alethiometer, or compass.

The more graphic look was popular with Scholastic and Pullman, but Crush was asked by Pullman to tweak details of the individual elements. Rush says, ’The animals had to be an exact representation of the books’ descriptions and any unnecessary design fluff had to be stripped away.’

Similarly, Crush had originally created a more elaborate bespoke font that was thought too over-complicated, so it was stripped back to a classic serif, says Rush.