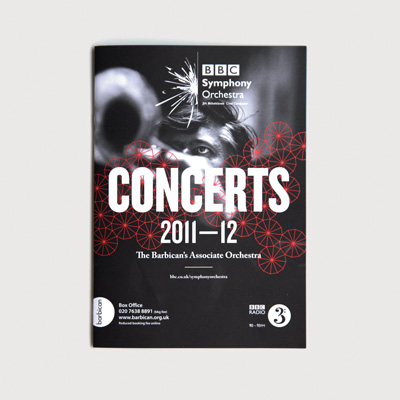 Harriman Steel has created a new visual identity for the BBC Symphony Orchestra, which will be used across the orchestra’s forthcoming seasons.

The BBCSO was founded in 1930 and its most important engagements include the first and last nights of the BBC Proms. It is also the associate orchestra of the Barbican Centre in London.

Harriman Steel was appointed to the work following an on-BBC roster pitch at the end of last year, according to senior creative Stina Smith. It was tasked with creating new visual guidelines for the orchestra, including new typefaces and graphic devices, although the existing logo is being maintained.

The consultancy’s visual guidelines will work as a toolkit that can be used across the range of platforms, from season brochures to online and newspaper advertising.

Harriman Steel has previously worked on projects for the BBC Concert Orchestra (DW 24 February), but this is the first work it has carried out for the BBCSO.

Smith says, ’The BBC wanted to freshen things up and appeal to new audiences, as well as the existing audience.’

The consultancy has developed two new fonts – a serif and a sans serif – as well as a series of patterns that can be used throughout materials.

Smith says, ’By using big and bold typography the message gets across fast and elegantly. Countering the typography are distinctive patterns that use a modular system that generates a sense of movement and change as you alter where you focus your eyes.’

Harriman Steel worked with photographer Jean Stockdale to create a suite of high-contrast, black-and-white photography. Smith says, ’With the photography we really wanted to get in there and capture the moment. Our focus was to keep the whole look quite branded and graphical.’

The new visual guidelines are rolling out this week on a brochure for the orchestra’s Barbican season, created by Harriman Steel, and the consultancy will also work on other collateral material.

The friends of Tony Romanoff