The Central Intelligence Agency (CIA) has redesigned its website and revealed a new logo in an attempt to attract more diverse employees.

The CIA is America’s international intelligence gathering organisation, differing from the domestic-facing Federal Bureau of Investigation. Though it has a history of being male-dominated, the current CIA director is a woman and women head up all five of the agency’s branches.

CIA director Gina Haspel told Associated Press (AP) that she hopes the new website gives people a sense of the “dynamic environment that awaits them here”.

“We’ve come a long way since I applied by simply mailing a letter marked ‘CIA, Washington, D.C.’,” she added.

According to AP, the overall intelligence community in the United States saw a rise in the number of minority professionals in 2019, up to 26.5% from 26.2%. The largest minority at the CIA is Black or African American (12%) followed by Hispanic (7%) while only 4% are Asian.

The new website has links for browsing jobs with detailed starting salaries and requirements as well as a streamlined application process. The revamped platform was announced via social media with the motto: “New Year, New Look”. 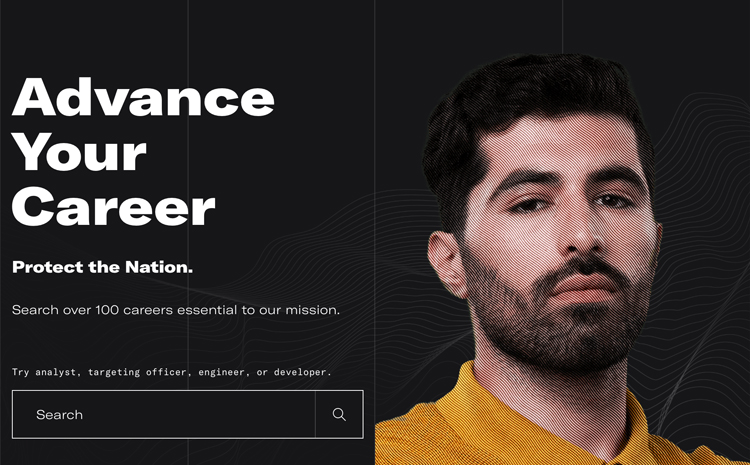 Along with the new site, a social media campaign has been launched with the hashtag #DiscoverCIA. This has launched on Twitter, Instagram and Facebook among others.

The updated black and white identity features a red accent colour and a range of typefaces are in use across the platform. Photography has been overlaid with a repeating line pattern.

Design Week has reached to the CIA out about whether the work was done in-house or by an external studio.

While the CIA’s eagle-based emblem appears unchanged (though it is now black and white on the website), a new logo has been revealed. In keeping with the monochromatic theme, the mark features the CIA acronym on a background comprising fractal lines.

It is not yet known how the logo will be applied, though Design Week has also reached out to the CIA about the roll-out.

Revealed on Monday, the new branding has prompted numerous responses across Twitter. Many have commented on the perceived trendiness of the logo, with one user pointing out its resemblance to posters for Canadian electronic music festival Mutek.

The new CIA logo is literally a Mutek poster pic.twitter.com/3RsPzWzDFt

Others have likened it to online music broadcasting platform Boiler Room:

What do you think about the CIA’s new website and logo?