The design studio, also based in East London, has worked on a launch campaign which rolls out alongside the new kits. 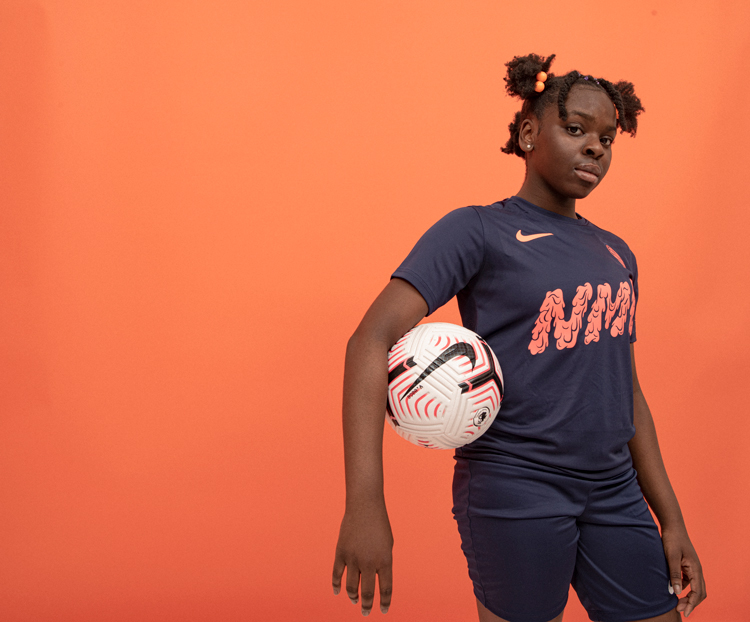 Hackney Laces was founded in 2011 by Katee Hui and aims to provide more football opportunities for girls, with the hope of improving other areas of their lives. The club now works with over 200 girls and women in East London and has two sister clubs, in South London and Limehouse.

Nomad has not only designed the kit but also become the team’s first official sponsor. The studio and team first started collaborating in 2018 when Nomad was researching women’s football for an FA branding project. 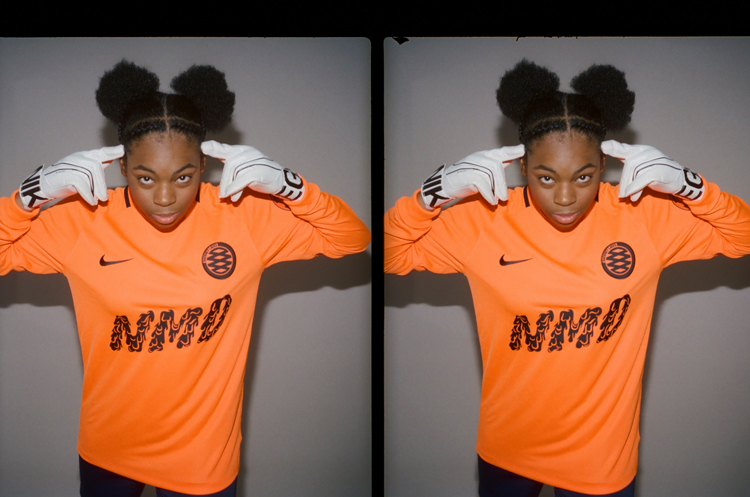 Nomad partner Terry Stephens tells Design Week that the kit design aims to avoid a “cliché approach to women’s kit and branding”. It also had to reflect the team’s Hackney origins.

“We wanted the girls to feel like they really belonged to something,” he adds. “It only took a couple of training sessions with them to realise they’re a hard bunch of girls.”

In terms of aesthetics, Stephens says they were more aligned with the tastes of the younger designers at Nomad, who like “Nikey gear in black and fluorescent colours”.

As a way to resist gender clichés and tie together contemporary streetwear and East London influence, the studio took inspiration from 80s and 90s skate culture, the designer explains.

“You’ve only got to look at brands like Supreme and Palace skateboards to see current influences,” he adds. “We also wanted to create something anyone would want to wear, even if you aren’t part of Laces.” 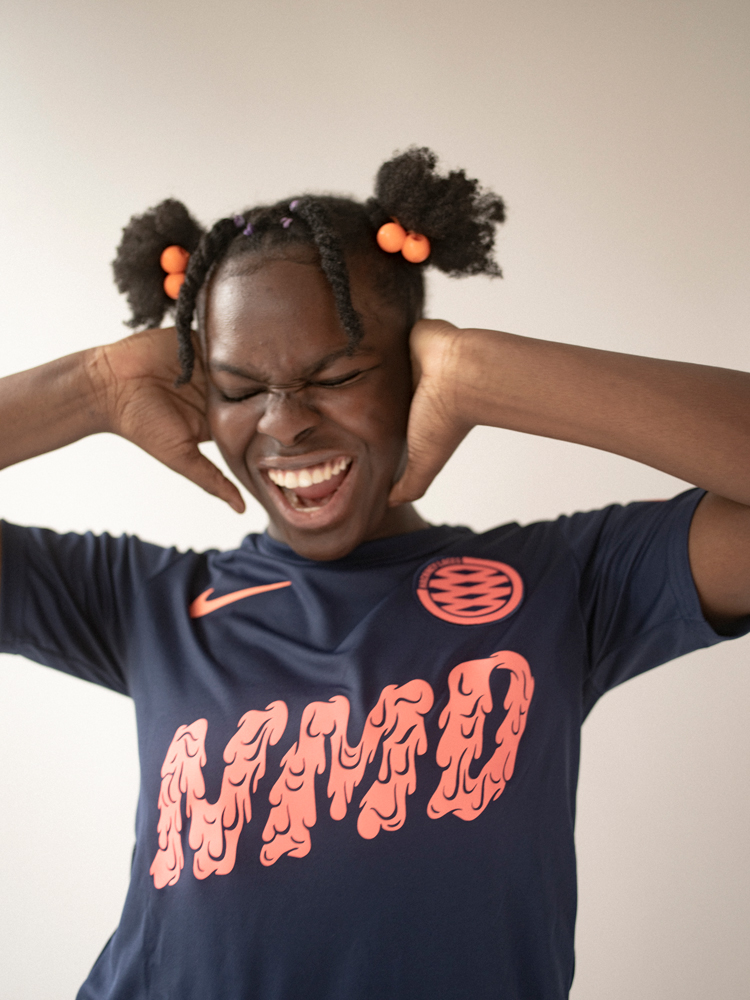 Illustrator Tobias Hall created a series of images for Nomad and a slime version of “NMD” has been used for the front of the shirt. Stephens cites brands like skateboard companies Santa Cruz and Powell Peralta as inspiration for the graphic.

It also created a note of intrigue for the kit, he adds. “It’s not a big corporate sponsor, which didn’t feel right for these girls,” Stephens says. “It’s a more interesting story for them to talk about when people inevitably ask them about it.”

Navy blue has always been the team’s colour, Stephens explains, but a fluorescent orange has been added for the kit’s detail updates. This was again inspired by 80s and 90s trends and its resurgence of in contemporary street wear. 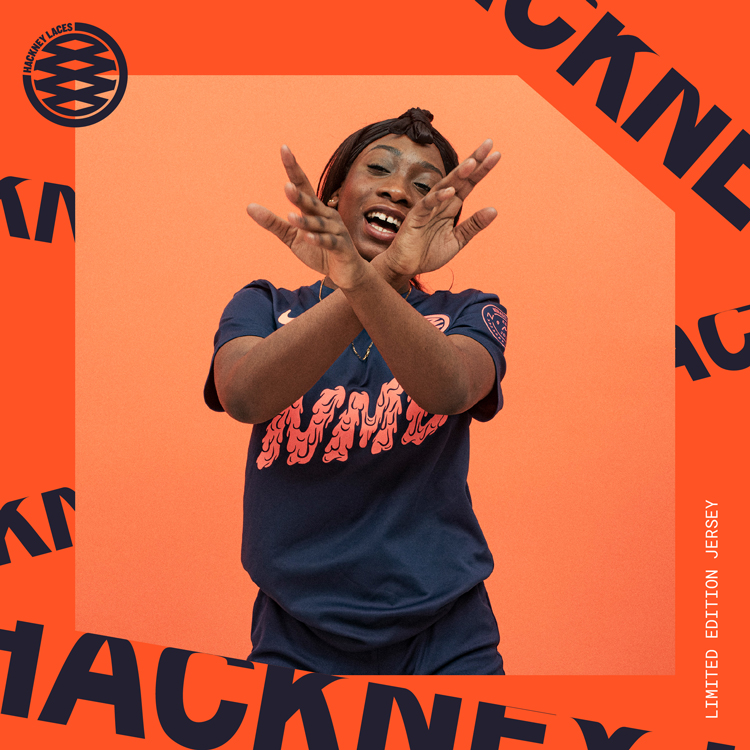 “It had a good edge to it, reflective of Hackney and East London generally and most importantly struck a chord with the girls themselves,” he adds. “They needed to feel a sense of pride in their kit,” the designer says.

The colour palette changes for the three teams; South London Laces has a white detail while Limehouse Laces incorporates a neon pink. The studio worked with the girls in choosing these colours, Stephens adds.

“The language of football shirts” 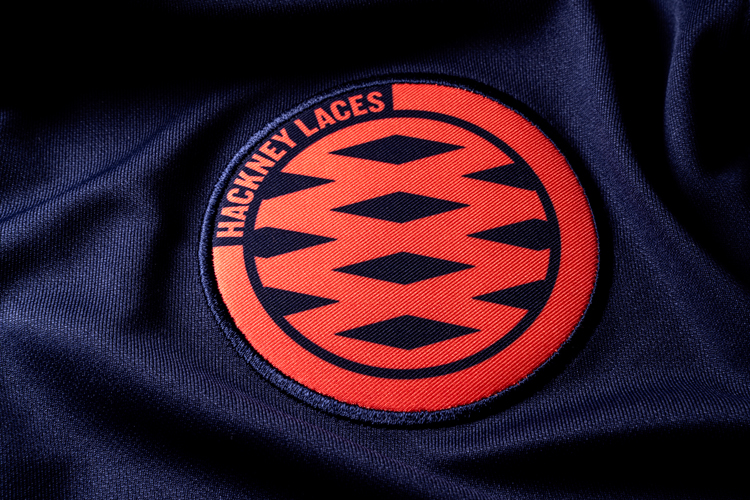 The team’s previous badge was designed by Pentagram and has been retained for the shirt and wider brand identity. Nomad has designed a custom set of letterforms and numbers for the shirts based on the badge’s underlying grid.

On the shirt sleeve is Nomad’s corporate logo, a detail that aims to “pick up on the language of football shirts” and provide a more formal counterpart to the front’s slime detail, Stephens says.

The studio worked with photographer Stephanie Sian Smith for the launch campaign photography. Merchandise with the new branding is available and all profits go to the running of the club.

“A football kit has the power to unify people; for many it’s a huge part of their identity,” Katee Hui says. “We hope that when others see us they think we’re a club for them.”