Whether they realise it or not, most UK television viewers of the last four decades will be familiar with the work of Martin Lambie-Nairn.

From the famous Channel 4 “blocks” logo, to paint-splattered idents for BBC Two, Lambie-Nairn’s mark on the television branding and ident landscape is unmistakable. His was a career that saw him establish two design studios, hold roles at ITN and the BBC, and later receive honorary doctorates from the University of Lincoln and University of Northampton.

Tributes have flooded in for the late designer, showing how he was easy to get along with, future-focused and generous with his time, as well as being someone who was full of ideas, which he could see through from concept to execution. 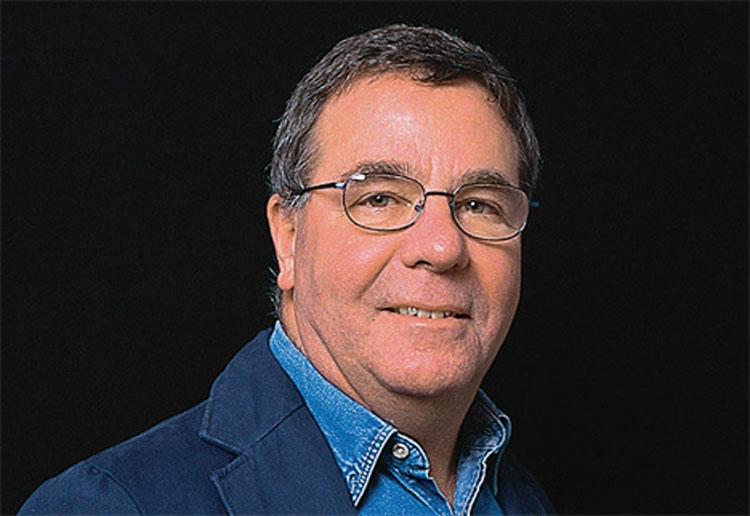 “We were just two men working in a little room”

Born in Croydon, south London, in 1945, Lambie-Nairn was educated at Canterbury College of Art, now the University for the Creative Arts.

His career in television began at the BBC in 1965. He then moved to ITN, where he would develop the on-screen graphics for the Apollo space missions and later the title sequence for the News at Ten.

Also around this time, Lambie-Nairn took on a role at London Weekend Television. It was here that he met friend and long-time creative partner Colin Robinson. The two would go on to found Robinson Lambie-Nairn in 1976, with Robinson saying the two complimented each other perfectly in work.

“We were anxious when we started out because we’d both left good jobs to go it alone,” Robinson recalls. “For some time, we were just two men working in a little room above Covent Garden.”

“Everyone knew the Channel 4 identity best”

They needn’t have worried. Robinson Lambie-Nairn won a series of high-profile contracts in the years that followed. The jewel in the studio’s crown for many was the Channel 4 “blocks” logo and identity which marked the channel’s launch in 1982.

“Everyone knew the Channel 4 identity the best,” says Robinson. “It was such a new challenge – we were creating the look for a whole new company that no one knew.”

Up against Wolff Olins for the Channel 4 contract, Robinson remembers the studio putting together an “ambitious” pitch. It won them the project, but the next question was how they could pull it off. The only way to deliver it, they decided, was to get computers involved. It would be the first project of its kind.

“Martin actually went to the US to work with a company there to develop it, it was so new,” says Robinson. The logo would also go on to inspire a spoof advert, made by the studio, for Hamlet Cigars.

Alongside Channel 4, another of Lambie-Nairn’s much-loved inventions was satirical puppet show Spitting Image. Thought up while he and Robinson were working for Weekend World, the story of its conception reveals Lambie-Nairn’s enthusiasm and innovative thinking writ large.

“In our role we had 24 hours to create the graphics for the show each week and one day Martin had the idea of doing an animated satirical news programme as part of the line up,” Robinson recalls. However fun it sounded, a 30-minute animated show each week was a lot to ask.

“He dropped it for a while, until a few weeks later – he’d thought up an entire plan involving Fluck and Law [caricaturists Peter Fluck and Roger Law] and just like that Spitting Image was born,” Robinson says.

“He would immediately put you at ease”

Robinson eventually left the consultancy to pursue other work, while Lambie-Nairn became consultant creative director for the BBC brand in 1990. It was a post he would hold for 12 years, and one that saw him revamp countless aspects of the broadcaster’s look, including work for BBC One and Two and BBC News 24 (now known as BBC News).

He continued to helm the studio throughout, making a significant impression on those he took in. One such person was now-Frank, Bright & Abel creative director John-Paul Sykes, who undertook his first design role at Lambie-Nairn.

“As a junior designer, it was quite daunting to think of working alongside such a legend as Martin,” says Sykes. “However, whenever we worked together, he was kind, patient and generous with his time.

“He would come and sit next to you when you were designing, offering his thoughts and advice. His fantastic sense of humour, and great impressions, would immediately put you at ease and make you feel part of the ‘family’.”

In 2009, Lambie-Nairn left his eponymous studio – which had by then been merged by WPP into the Superunion group – to head up branding consultancy Heavenly as executive creative director. He joined with a set of objectives: to raise creative standards, boost creative leadership and develop strong links between creative and strategic offerings.

It was a short stint with the consultancy – he would later cite the desire for a better work-life balance as his reason for leaving – but nonetheless he left having managed to achieve his goals in under three years, and leave a mark on those around him in the process.

Indeed, Lambie-Nairn’s drive and commitment gave way to a running joke within Heavenly, according to its CEO Richard Sunderland: “We used to say that if Martin was a piece of type he’d be italicized, as he was always forward-leaning, always in motion.”

Sunderland, who had personally known Lambie-Nairn since the 1990s, refers to his friend and colleague as the “Godfather of broadcast branding”. But he adds that it was his “industry and generosity” that truly set him out from the crowd.

“Every day [at Heavenly], he’d move from person to person in the creative team, like a bee pollinating flowers,” Sunderland tells Design Week. In particular, Sunderland remembers Lambie-Nairn being generous with younger designers – something that “instilled such confidence” in those just starting out.

“To him, everyone had it within themselves to be world-class,” Sunderland continues. Unsurprisingly, this was a confidence he tried to instill in those around him. Other lessons, Sunderland recalls, included being “uncompromising in the quest for quality” and giving clients “what they need, rather than what they want”.

“An inspiration and a pioneer to the very end”

Those he mentored earlier on in their careers went on to become friends. Federico Gaggio, creative leader at brand consultancy Do & Company first met Lambie-Nairn in 1990: “Martin received me with kindness, sharing his most iconic work.”

When he moved to English+Pockett, one of the Lambie-Nairns competitors in the TV branding world, that kindness did not falter, Gaggio adds.

“Over the years, he kept generously sharing his advice, criticism and warm hugs while saying ‘we’ve got to get ‘your lot’ and ‘our lot’ together’,” Gaggio tells Design Week.

In some cases, mentees could become clients of their own. Gaggio recalls the last time he met Lambie-Nairn professionally was when he came to pitch a channel branding idea to him at Discovery.

“I was amazed to find myself as ‘the client’ at the receiving end of his creative genius,” he says. “The idea he pitched, story-boarded with his own beautiful hand-drawn illustrations, was cutting edge and utterly distinctive.

“He remained an inspiration and a pioneer to the very end.”

Martin Lambie-Nairn died on 25 December 2020, at the age of 75. He is survived by his wife Cordelia Summers and their three children, Fenn, Flavia and Van.