British-Nigerian designer Yinka Ilori has been made a Member of the British Empire (MBE).

He has been recognised as part of the New Year’s Honours list for 2021, which has also celebrated several others within the design and wider arts community this year. 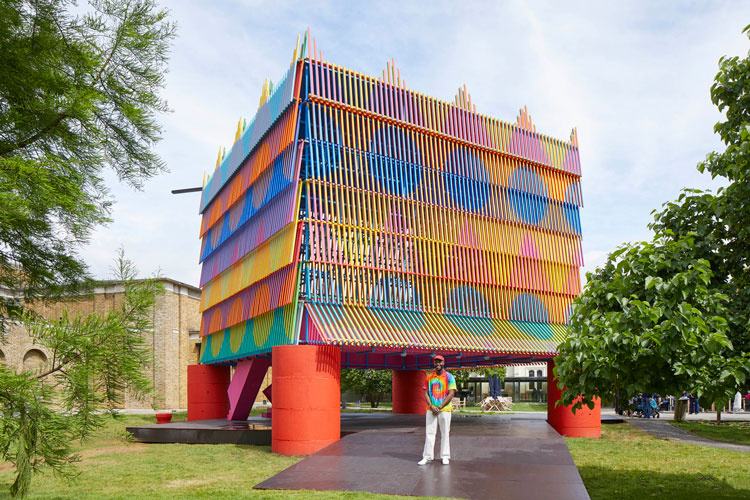 “I was struggling to believe in myself”

Known for his signature colourful style, Ilori has been a rising star within the UK’s design industry for some time. Beginning with upcycling furniture in 2011, in 2020 the designer turned his hand at skatepark design, created an installation for Chelsea and Westminster Hospital (seen in the banner image) and also launched his own homeware collection.

Alongside his MBE, Ilori also won the Design Museum’s Emerging Design Medal in 2020.

But even with multiple awards and recognitions now under his belt, the designer says it hasn’t been an easy journey to this point. Taking to Instagram to react to his MBE, he revealed there were “time I was struggling to believe in myself”.

“In 2015 there were sometimes thoughts of giving up designing due to the frustration and feeling people didn’t understand the designer I wanted to be,” he continued. “The driving force behind me to continue and push through was always the desire to make my parents proud.”

Awards for theatre and furniture designers

Crawford, whose practice Studioilse is based in London, is a multi-disciplinary designer specialising in “human-first” interiors and furniture. Alongside her work, she is also the founder of the Department of Man and Wellbeing at the Design Academy Eindhoven.

Meanwhile Dudley has been working in theatre design since the 1960s and has created sets for more than 50 shows in that time. Originally trained in fine art painting, he has for almost two decades been using projection and computer graphics to create immersive experiences on stage.

Alongside Ilori, Crawford and Dudley, other appointments on the 2021 Honours list recognised design consultancy leaders. Joanna Gabrielle Da Silva, director at Arup, was given an OBE for services to engineering, and international sustainable development, while Tim Brown, chair at IDEO, was awarded a CBE for services to design.

More awards in charitable and public sector art and design circles were also made. Dr Stephen Deuchar, lately director of Art Fund; Jonathan Claypole, director of BBC Arts; and Eleanor Constantine, director of the Arts Council Collection were recognised for services to the arts.

To read the full list of honours, head here.