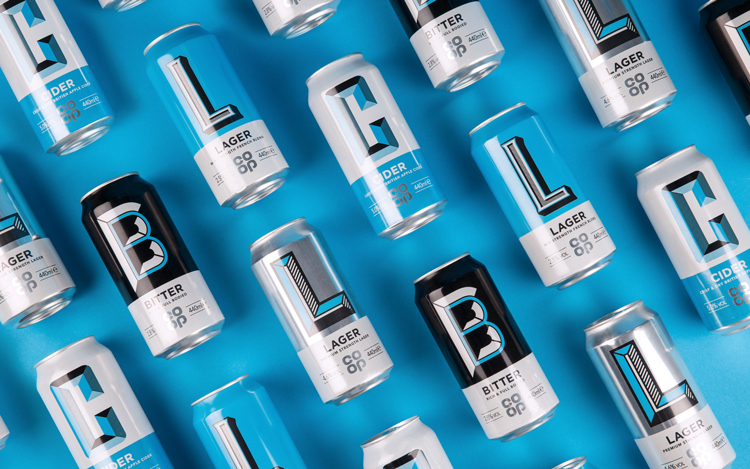 When you think of own-brand alcohol, connotations of student binge drinking, cheapness and the faint taste of paint-stripper come to mind. But how many of these presumptions are down to packaging and branding?

The Co-op is known for its focus on brand design, having previously commissioned studio North to rebrand the supermarket chain in 2016, giving it a more minimal logo and a purely blue-and-white aesthetic.

Now, the brand has commissioned Robot Food to redesign its own-brand alcohol range, which includes beers, ciders and spirits, retaining the blue-and-white palette associated with the brand but adding a silver shade and monochrome. 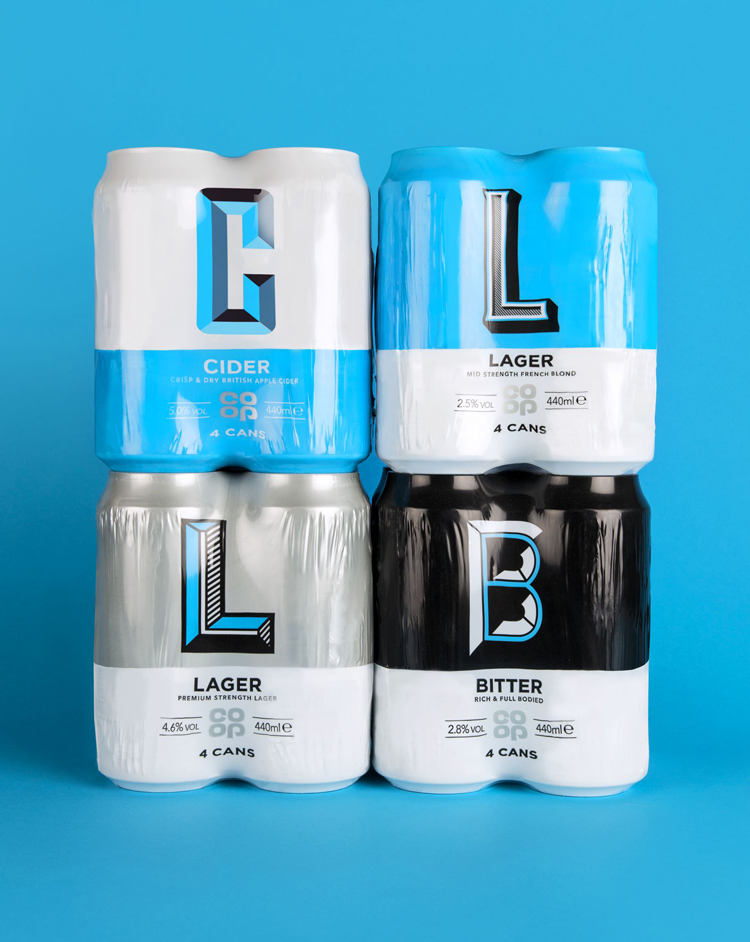 While all the labels and packaging are black-and-white, with hints of Co-op blue and silver, different forms of alcohol take on different illustrative styles – beer and cider packs aim to be “straight-forward and easy to understand”, says Ben Brears, senior designer at Robot Food, through a simple design featuring a block letter indicating whether it is a “lager” or “bitter”, for instance.

The spirits feature different style, from a Russian constructivist-inspired striped design for vodka, to a blue-and-white illustration of the sea accompanied by a more sombre sans-serif typeface for the navy rum. 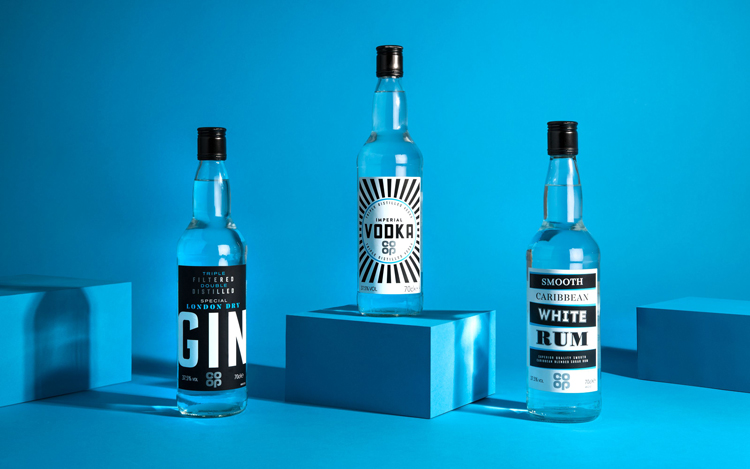 “Spirits tend to be a more considered purchase decision but are often viewed from two metres away over a counter, so they needed to have their own identifiable design traits,” says Brears.

The Co-op’s alcohol ranges were previously a mish-mash of different colours, bottle shapes, typefaces and illustrations. While the new identity looks to give each type of alcohol its own unique style, a limited colour palette, as well as consistent bottle and can shape and style aim to give the range a Co-op feel, adds Brears, while retaining the “personalities” of the different sub-brands and an “eclectic” feel. 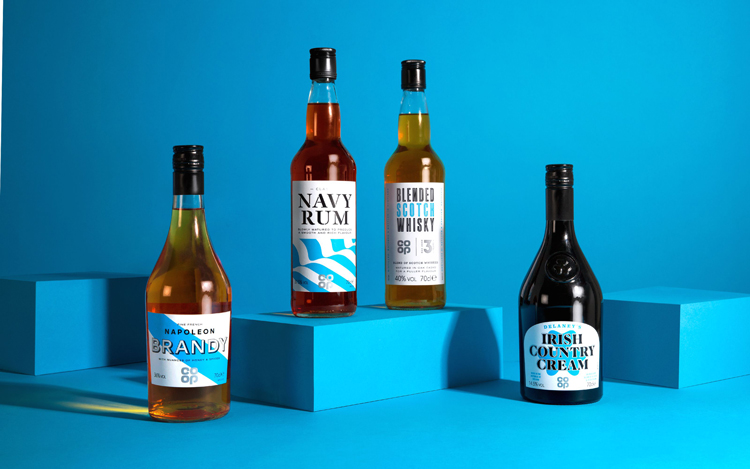 The unified look aims to change perceptions of own-brand alcohol ranges as being sub-standard and not being a brand within their own right – having a consistent identity helps to establish a range as more legitimate.

“Perceptions of own-label alcohol haven’t been great,” says Brears. “This hasn’t been helped by design that made it feel like a cut-price, inferior alternative to the ‘real’ branded product. We wanted to create something that was distinct and recognisable in its own right.”

The new branding and packaging is currently rolling out across all on-shelf, Co-op alcohol products. 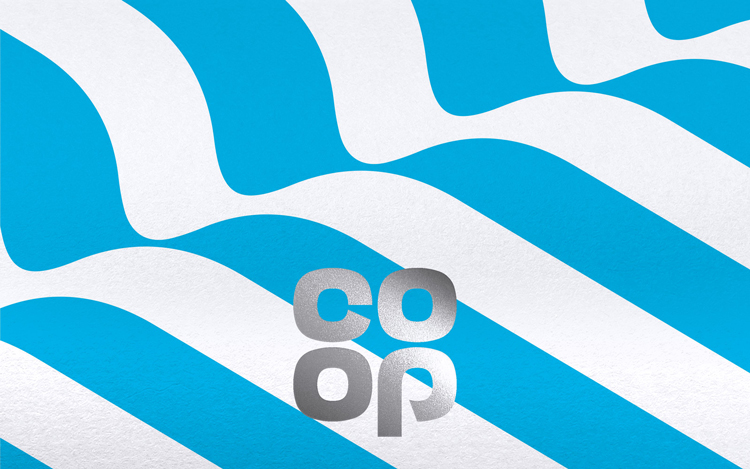 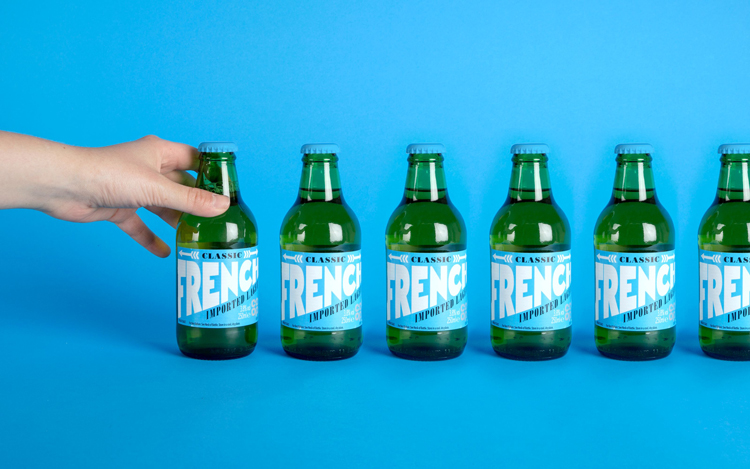 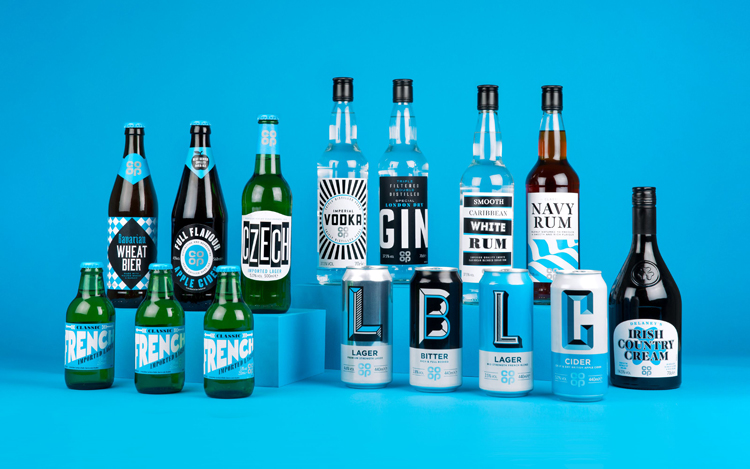 Great Exhibition of the North: what designers should see