The designs were developed by London-based Charlie Smith Design. The studio has previously worked with Royal Mail, creating a collection to celebrate Beatrix Potter’s 150th birthday in 2016, as well as designing collectible products to accompany the Songbirds issue in 2017. 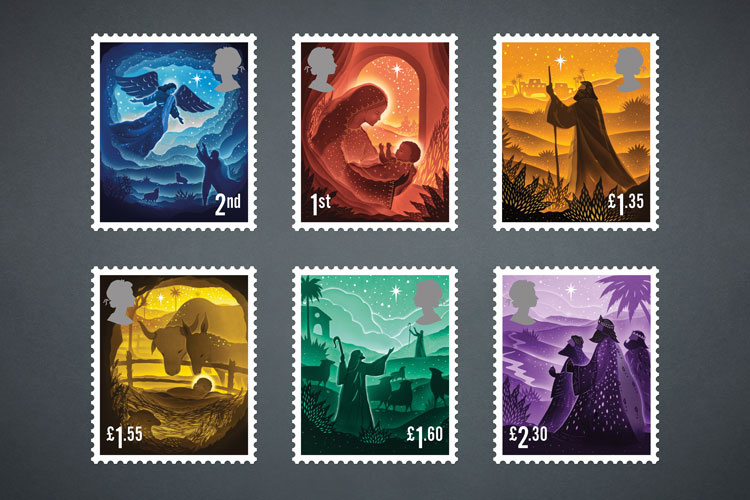 “The Christmas stamps alternate each year between secular and religious designs,” say Charlie Smith, founder and creative director of Charlie Smith Design. “We were tasked to produce a Nativity-themed collection, with a three-dimensional quality.”

Following this theme, on this year’s first-class stamp is a depiction of Madonna and child in red, while the second-class features an angel and shepherd in blue. Other designs include the three wise men, Joseph and a manger scene.

Beyond the Christmas issue stamps, the team has also created a selection of accompanying collectible products. These include a First Day Cover complete with nativity scene post marks and a presentation display pack. 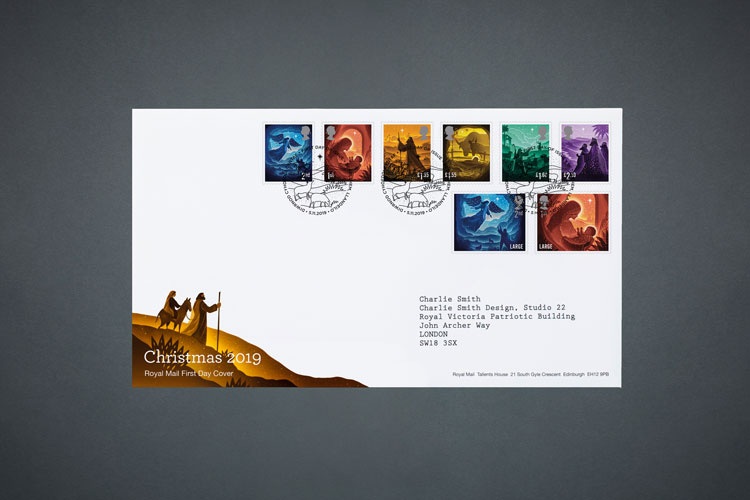 Smith says balancing the quality and detail alongside the Royal Mail’s strict guidelines relating to legibility of the Queen’s silhouette and value of the stamp, while working on such a small canvas was a particular challenge.

“We explored a variety of mediums from tapestry to wood engraving, we were drawn to work with multiple layers and depth,” she says. “Given the scale of a stamp, we quickly came to the conclusion that paper art would be the most suitable approach to retain the level of detailed required at miniature size.”

For this, the team enlisted the help of paper-cutting artist duo Hari and Deepti, whose previous work includes numerous literary projects and installations. Drawn by the duo’s previous work, the team worked for more than a year on the designs. 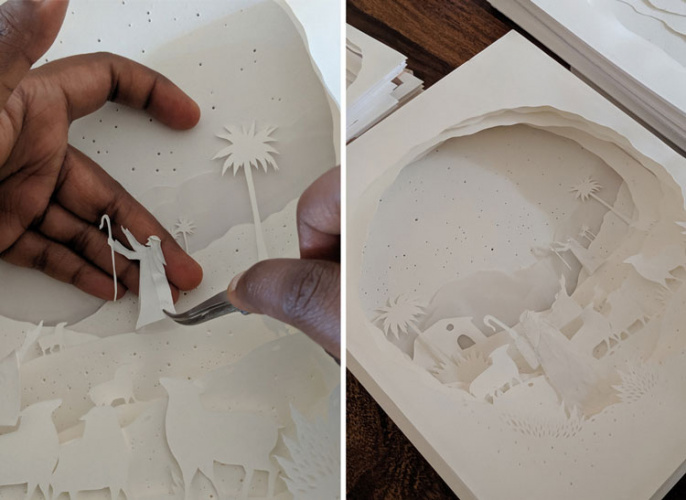 Hari and Deepti typically work on large-scale A1 paper cutting projects, so Smith says scaling that down was a significant part of the journey. “How to encapsulate their aesthetic without paring it back too much was definitely a fine balancing act,” she says.

“Much of their work has around 20-30 layers, and through various rounds of sketches and tests, we realised a maximum of about 10 layers was best suited for stamp size.”

The final designs are the product of “many iterations” according to Smith. The end result, she says, is a “new and fresh approach to portraying the Nativity scene” which comes complete with Hari and Deepti’s “exquisite light box work” and “jewel-like colours and depth”.