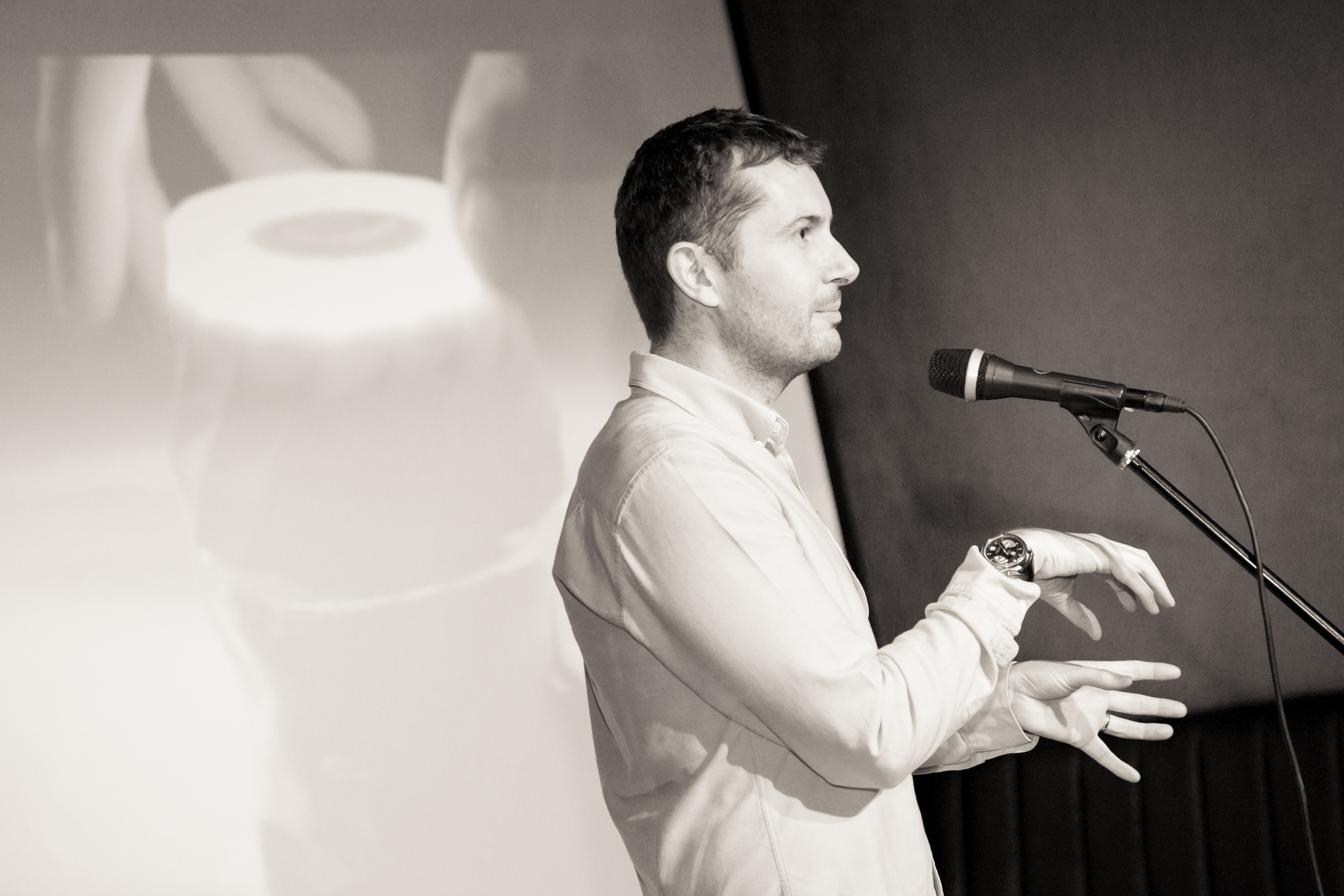 When did you realise you wanted to work in design?

I’m not a designer. At times I’ve been more hands-on with creative, and I’ve led much of our motion and content work through the years. I love seeing the incredible output of the studio, but don’t miss the ‘making’ too much. I find running and growing a business can be creative too.

Ha! I got bored at university and ended up running a nightclub in Nottingham in my spare time. I’ve always been a promoter at heart, I guess. My first part-time job was potwashing in a greasy spoon in Birmingham. Nine hours straight every Saturday, washing up plates. I’ve never had a problem with hard work.

Recently I focus more on business strategy, vision and marketing as part of the Chief Exec role. That’s about building the profile and size of Studio Output and Found, and ensuring we’re always moving forward.

I also focus a chunk of my time on Glug, the global creative community we founded. It started off as a bit of side project but has now become monstrously successful in its own right, with 33 city chapters worldwide.

Probably the explosion of multichannel and digital technologies. A modern branding and design agency needs to consider every channel when delivering work. That’s a new challenge that wasn’t a key consideration back in 2002. That’s one of the things I’m most proud of at Studio Output. We always deliver great work that builds cohesion across channels.

While it was a challenging production, I think the Great Films Fill Rooms project we delivered for Sony PlayStation was pretty incredible for its time. My mum is most proud of the Wispa It’s Back campaign. As a Brummie boy, it’s nice to hear that the Wispa relaunch kept the Bournville factory open.

Being quite an ‘in the moment’ sort of person, I love the BBC Sport Brand Refresh we’ve just done with BBC Creative. It really demonstrates the skills of the agency to develop a modern multi-platform brand and achieve consistency agency across channels. Rob Coke and the team did a brilliant job on this.

Without sounding like I’m dodging the question, I don’t really believe in failures or big mistakes. Every failure is a chance to learn and modify your approach, and some of the hardest times I’ve had have taught me the most. Don’t get me wrong, there have been a few bad decisions over the years, but thankfully more good ones – often as a result of the perspective and experience I’ve gained.

I’d like to see a complete change in perspective on the role of design and the creative industries in general. It’s starting to happen but it’s very slow. Governments and the general public don’t yet realise the value and importance of design and its role in taking the human race forward.

As technology evolves, artificial intelligence and machine learning will replace many traditional vocations. Roles within design and the creative industries are likely to be least replicable, so potentially may become more and more important.

While at Studio Output and Found we’re focused on visual design, I want to play a part in championing the significance of global creativity. Hence the role of Glug and its mission to be ‘Creative Champion of the World’.

There isn’t one standout person I’m afraid. My business partners Dan Moore and Rob Coke have both been a source of inspiration through the years. I’ve been lucky enough to work with maverick artists like Barney Steel and Robin McNicholas, and industry legends like Jim Thornton of VCCP (and every other good advertising agency you’ve heard of). From a client perspective I’ve worked with some incredible Marketeers over the years and probably chief amongst those is Mark Hardy – formerly of PlayStation, Syco and Viber.

Rather than a direct piece of advice, I’d perhaps ask them to consider their options:

Should I go down a more traditional route like Art College and University? Or look at alternative courses to take while going straight into the agency world at 16 or 18? Recently I’ve met a few people who chose this ‘other way’ and it’s meant that by 21, when their university peers graduate, some of them have 3–5 years’ commercial experience – and probably less debt.

Saying that, I know University helped me greatly to mature as a person. So I guess it’s about choosing a route that suits you.

V&A celebrates “craft for our time” with new exhibition