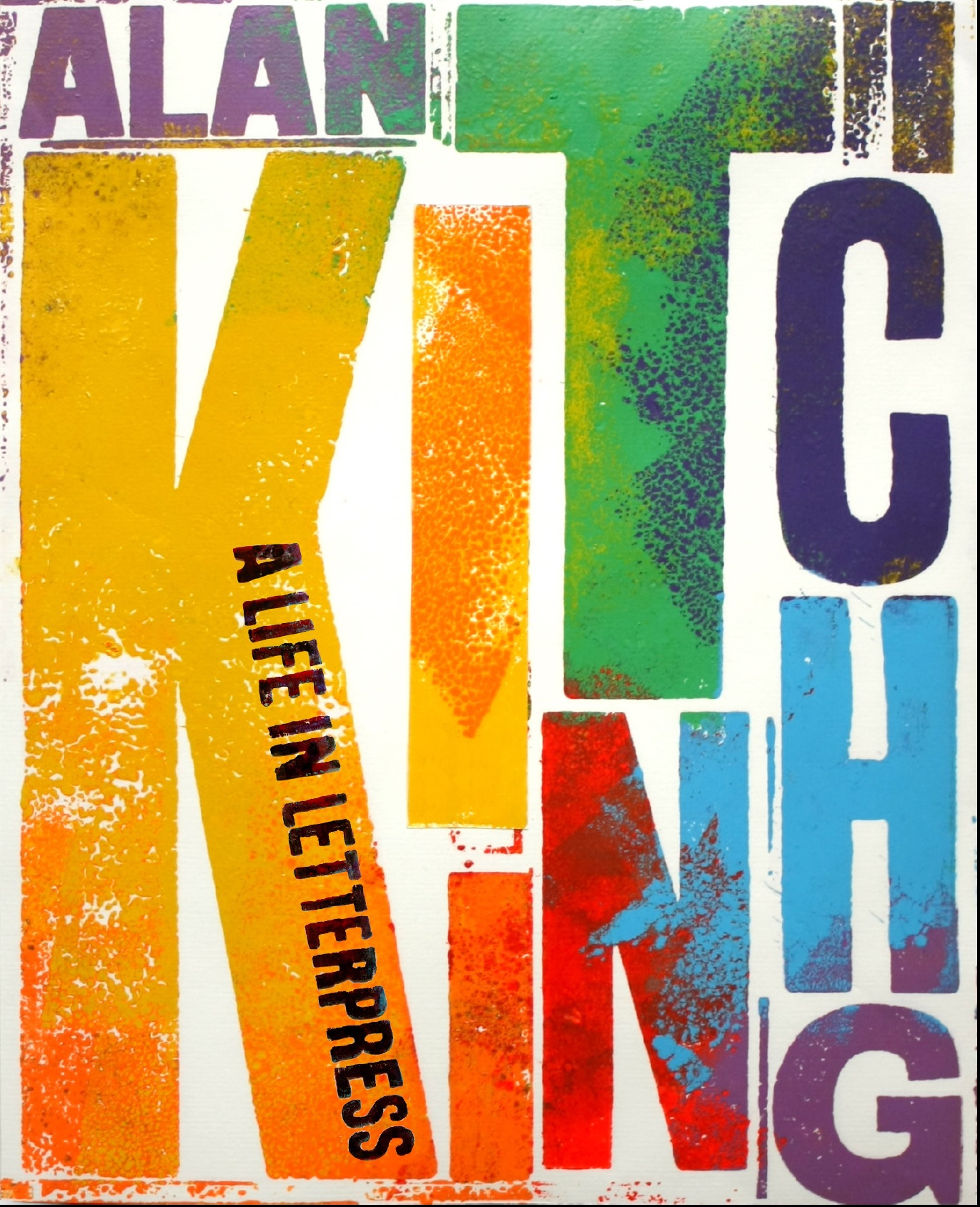 The career of Alan Kitching has a trajectory all its own, with no antecedents and few pretenders to his throne. There are other designers who have reinvented themselves as artists – Karl Gerstner, Richard Paul Lohse and Barbara Kruger among them – and retained some of the formal processes they learned while working at the coalface of commercial practice.

There have also been many artists, such as Tom Phillips, Rosalie Gascoigne, Jenny Holzer and Lawrence Weiner, who have made words and letters the central element of their work, and, over the past century, concrete poetry and prose have found a place within the multidisciplinary context of contemporary art.

Kitching’s work lies in a kind of parallel art world, even though his editions hang in private collections and on the walls of galleries. Student designers get excited when they discover his maps and posters on social media sites. The burgeoning enthusiasm for such dying arts as letterpress (along with bicycles and old-fashioned barbers) within the “hipster” community has provided a new fan base for Kitching’s prints as examples of an arcane craft. His talks to advertisers, illustrators, web designers and other “creatives” sell out quickly, and the sight of his big letterpress posters causes gasps of approval.

Something of an outsider

Yet Kitching has neither a secure slot within the matrix of the international art world, nor a comfortable place within the pantheon of British design and graphic art. Since 1994 he has been a member of the elite international community that is the AGI (Alliance Graphique Internationale), but he has long been something of an outsider, though certainly not an “outsider artist”.

During the early part of his career Kitching was undoubtedly a valuable part of the British independent graphic design scene, as defined (in part) by books such as Seventeen Graphic Designers: London (1963), The Dictionary of Visual Language (1980), Richard Hollis’s Graphic Design: A Concise History (2001) and Rick Poynor’s Communicate (the catalogue for the exhibition curated by Poynor at the Barbican in 2004).

For more than two decades, Kitching was a quiet presence on the London scene, standing at Anthony Froshaug’s elbow, teaching, printing and laying out texts while the newly recognised practice of graphic design established roots in the sophisticated analogue culture that spanned the time from the swinging 1960s to the yuppie 1980s.

Kitching’s natural skill, his blunt but likeable personality, his intelligence and his shrewdness ensured that when he went it alone, he was not cast adrift. Despite some hard times in the early days of The Typography Workshop, his old friends rooted for him and his teaching activities meant he acquired new friends and acolytes in the increasingly digital world of the 1990s.

His practice has blossomed. His accomplished and visually arresting prints are instantly recognisable, yet he rarely repeats himself: his best work always pushes towards some new goal or undiscovered aspect of the compositional tools at his disposal. Like any decent designer, he interprets his commissions with intelligence and flair; like any good artist, he reflects the temper of the times.

The transition of mass culture from analogue to digital, the slow and expensive shift to new technology that began in the 1980s and continues to this day, has caused a tidal wave of creative noise, a rush of invention and activity in which totally new skills, attitudes and talents have arisen within the general confusion and chatter. The sheer volume of material, of text and texture, type and image, pattern and visual splatter that is produced and processed daily surpasses anyone’s ability to understand it.

Anyone with a poem, a political slogan or an advertisement can share their message through the myriad channels that run through the World Wide Web – a medium that did not exist when Kitching decided to abandon conventional design and “go and print”. When he was young, the only way to disseminate the written word was through printing; every word went through the hands of a compositor like himself.

A sense of the power and responsibility invested in this position has stayed with Kitching throughout his career. He has always sought to set words that need saying: names, information, Shakespeare, headlines, poetry and maps. The beauty of his letters always serves the meaning of the text.

Kitching’s practice is made special by his ability to wrest powerful pieces of communicative artwork from an industrial process whose original use has been superseded. He savours the act of composition, the details of spacing and justifying metal type, the imaginative inking of huge woodletters.

Despite the hard-won skills that enable him to create immaculate impressions on paper surfaces, the type and forme and press and paper are ultimately the means to a number of different ends.

In much the way that young practitioners now harness new technology to their own visions, Kitching has grown as a creative designer and artist by taking control of old technology – letterpress printing. In his hands, The Typography Workshop is a complex and subtle instrument: his brushes, paint and easel; his film set; his orchestra.

Alan Kitching: A Life In Letterpress by John L. Walters is published by Laurence King and only available from its website. Limited Edition £75, Collector’s Edition £200.