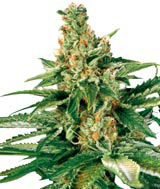 A bar. Central London. A young woman orders a red wine, a packet of peanuts and asks to see the cannabis menu.

This scene may not be too far off. Social attitudes to the drug are shifting, not to mention public policy, and cannabis cafÃ©s may become as familiar a sight in Britain’s towns and cities as they are in Amsterdam.

Reports last week revealed plans for a chain of ‘Dutch-style’ coffee shops, building on the notoriety of Stockport’s Dutch Experience cafÃ©, which, despite being illegal, raided by police and having its owner jailed, reputedly attracts around 200 people a day.

Entrepreneurs are giving serious consideration to the opportunity to open cafÃ©s following a Government advisory committee’s call for cannabis to be downgraded to a Class C drug, reducing penalties for possession (although not, at this stage, decriminalising it). A posse, among them David Crane, founder of fledgling chain Greenhouse CafÃ©, last week attended a crash course in cannabis cafÃ© management in Amsterdam, called Cannabizness.

Given that marijuana is still illegal, it is hardly surprising the issue of cafÃ© design has barely surfaced. But a handful of designers and entrepreneurs, hoping to throw open the doors of the UK’s first legal coffee shop, are starting to address it.

Former Shh head of retail division-turned freelance creative, Steve Crummack, is creating concepts for an international cafÃ© chain, which is set to launch in Amsterdam in the autumn.

The Dutch capital is accustomed to cannabis cafÃ©s, but countries such as Britain are obviously not. Accordingly, British outlets of the as-yet unnamed chain must differ considerably from Amsterdam coffee shops, Crummack says. For example, alcohol must be served alongside spliffs, he says, to cater for unsophisticated British consumers’ tastes.

‘The coffee-drinking, outdoor cafÃ© culture is immature in the UK and cafÃ©s are still treated as indoor bars where alcohol is a given,’ Crummack says. ‘Furthermore, the UK mentality is that you need to smoke and drink together.’

The dismal British weather plays a strong part in our pub culture and the older generation would also be horrified if young people were smoking weed in outdoor cafÃ©s, he suggests.

Of more concern is the overt nature of smoking in street cafÃ©s, which would not find favour with British consumers preferring something more discreet, Crummack says.

He likens this closed-door mentality to that of betting shops, which were recently overhauled to remove window coverings. But punters preferred the anonymity afforded by covered windows and the shops switched back.

The answer is smoking-dens annexed to bars, Crummack says. These would allow ‘older generations’ to drink in peace next door.

Practically, furniture should be in deep colours ‘without being too ethnic’ and manufactured from tough fabrics to withstand burning ends, he says. Consumers would require easy-to-understand menus to avoid embarrassment, and joints could be served at tables or ordered via intercoms.

The first cafÃ© is scheduled to open in Amsterdam in September, and the client plans to open in the UK once cannabis is legalised, ‘in about three years’, Crummack predicts, somewhat optimistically.

The consensus among most entrepreneurs is to create elegant, design-led cafÃ©s providing a pleasant environment rather than scruffy, student union-style venues.

Simon Woodroffe, founder of the Yo! Sushi bars, says he would be interested in opening licensed cafÃ©s if cannabis was legalised and would create ‘upmarket’ places run by reliable operators.

The experience of going into a cafÃ© should be similar to going into a well-designed, stylish bar, not a dodgy cafÃ©, he says.

‘The UK has always been a pioneer in terms of taste, style and innovation, particularly in the fields of music and fashion,’ Woodroffe says. ‘This mentality and taste ethic would work well if applied to coffee shops.’

He refuses to be drawn further on how he would envisage a Yo! Blow cafÃ© (a joke name he invented last month when interviewed by a national newspaper), but says that he would opt for ‘elegant design solutions’.

His fascination with a cannabis cafÃ© project was inspired by smoke-extracting ashtrays in his Yo! Below bars. ‘I jokingly suggested smoke could be extracted this way from a room and pumped into the air so customers didn’t even need to smoke cannabis themselves,’ he says.

In enlightened cities such as Amsterdam, however, coffee shops are already two a penny and have become sophisticated brands in their own right.

One of the most high-profile and successful of these is The Netherlands’ Bulldog empire, incorporating themed cannabis cafÃ©s such as All Sports CafÃ©s, Rockshops and Energy Bars, a low-budget hotel, energy drink, souvenir shops and even a Rent-a-Bike facility.

The brand’s latest incarnation is the Bulldog Lounge, a coffee shop aimed at business customers.

With facilities such as lap-top points, the lounges hope to attract ‘high-rent, hotel district clientele looking for somewhere to smoke’, says Bulldog’s Raymond Maigret. They are designed to look like high-end gentlemen’s clubs with opulent interiors in ‘rich leather’.

‘Businessmen don’t want to sit with backpackers,’ Maigret says. But backpackers are the majority. Around 40 per cent of all cafÃ© patrons are tourists and the majority are travellers, he adds.

The UK is years away from The Netherlands’ sophisticated approach, but it is starting to take the reality of cannabis cafÃ©s more seriously. It just remains to be seenhow the authorities will respond.