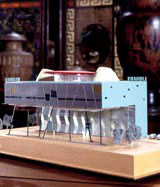 In contrast, Will Alsop – that’s Professor William Alsop OBE RA – is very much a deliberate romantic. You can see this from the display of sketchbooks that forms the heart of this show. Alsop rejects the reductivist, professional, 9H pencil view of architecture in favour of an art-based, from-the-heart, blobs-on-stilts approach. This is as much his unique selling proposition as radical classicism was Soane’s. So, how do the two men get on?

They have to, because Alsop at the Soane is the third in a series of contemporary architecture exhibitions mounted by this excellent, if distinctly spooky and claustrophobic little museum, which was originally Soane’s own house.

Alsop follows in the footsteps of Frank Gehry and Daniel Libeskind. He is, therefore, the first Brit to take on the revered Soane at home, unless you count the precision-engineered, climate-controlled vertical glass display cases by Eva Jiricna that grace the tiny exhibition gallery.

The idea of this series is that the invited architects respond to the genius of Soane somehow or other. All have scattered their models around the museum rather than confining themselves to the gallery, and Alsop is no exception.

But in his case, he has also made a bravura graphic statement. Hanging from scaffolding in the museum’s tiny central courtyard is a big (3m x 1m) rigid transparent orange polycarbonate banner. You see this from various angles as you circulate around the museum.

The banner carries some typically Alsopian sloganising, designed to be seen from both sides. Phrases such as ‘pockets of complexity’, ‘The Arcadian River’ and ‘miniature vistas’ could be said to apply as much to Alsop’s work as to Soane’s.

The colour and semi-transparency of the banner also echoes Soane’s famously sophisticated use of coloured glass and light. In fact, the exhibition would work if it consisted only of this single prominent object. But the 16 sketchbooks, plus a couple of big ‘computer paintings’ in the gallery add an extra layer of interest to proceedings. Here is Alsop being the artist he likes to be thought of. They are carefully-chosen, not all of them being the rapidly-produced dribbly watercolour daubs for which he is best known.

As for the models, DVD films and photos of finished buildings and real-life projects, well, they are not quite so interesting as the abstract stuff. Alsop has not made special models to fit the domestic scale of the museum, as Libeskind did. They are interesting, but they intrude. Far more appropriate, somehow, are the little working models, usually basic shapes in polystyrene, which act as exploratory tools in Alsop’s design. Never forget that, for Alsop, function follows form.

While Alsop and Soane certainly do share some architectural concerns over light and colour, there’s no getting past the fact that their buildings are chalk and cheese. Soane constantly refined and reduced his overt effects: Alsop slaps them on with a shovel.

Luckily, the exhibition as a whole is strong enough to overcome this slightly jarring note. It is well worth checking out. And well done, the Sir John Soane’s Museum, for engaging fruitfully with the modern world of art, graphics and architecture. For years the museum was one of those places for initiates and historians only. Now it is winning a very different audience. But please don’t let it get too busy.

‘Will Alsop at the Soane: Beauty, Joy and the Real’ is at Sir John Soane’s Museum, 13 Lincoln’s Inn Fields, London WC2A until 8 June