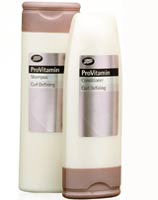 Boots the Chemists will launch a haircare range, Stuff, and a vitamin shampoo, ProVitamin, on 15 April in an attempt to take on market leaders in both sectors.

The combined project represents a five-figure investment in design by Boots. Packaging for both ranges has been designed by NB Studio.

Stuff is targeting a younger audience and competing with brands such as Shock Wave. The new range includes product enhancements and extensions including wax, putty, spray, gum and stick wax.

NB Studio design director Nick Finney says Stuff is aimed at a younger market that is unimpressed by the designer feel of brand leaders.

Finney says, ‘The name Stuff is the antithesis of designer culture. We also adopted a no-nonsense graphic approach with simple type and colours. We wanted to keep it plain and simple and have most of the detail in the finishing.’

‘Boots wants to appeal to a more up-to-date market that is looking for vitamin benefits in a shampoo,’ Finney comments.