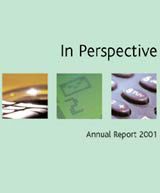 Redhouse Lane unveils its work for Oftel at the end of April when the telecoms regulator publishes its annual report and accounts.

The group was awarded the work following a four-way unpaid creative pitch on 25 February.

Duncan Stroud, director of communications at Oftel, says, ‘We were looking for a clear, simply laid out design that tells the story of Oftel’s work in the mobile, Internet, broadband and consumer sectors. It’s important the design reflects the fast-moving and technical nature of the industry we work in.’

The consultancy is also designing annual reports for the Small Business Service and British Waterways, making Oftel the third annual report the consultancy has worked on in the past month and bringing its claimed new business to more than £50 000.

The SBS annual report will be used to articulate the brand and highlight the organisation’s messages both inside and outside Whitehall.

SBS will publish the report in July.