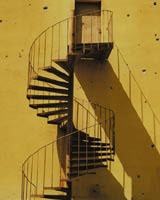 Afterglow, a book of Ori Gersht’s photography, is to be published on 15 May.

The book is being produced to coincide with the opening of two exhibitions of Gersht’s work, including one at Tate Britain, which features a number of new photographs and his debut video from the ‘Being There’ series (The Israeli desert, 2001).

Afterglow is a 176-page monograph of Gersht’s work over the past four years, designed by Lea Jagendorf and produced by August Publishing, priced £22.

Correspondence 01 to be published on 30 April