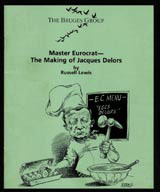 The Bruges Group says it has not dropped its trademark dispute over the design of the Government’s EU presidency logo, despite failing to address the question at its latest meeting. Director Robert Oulds says the group’s lawyers have advised that it is still not ‘too late’ to take action.

The Escape appointed by London & Quadrant