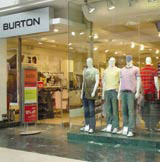 No longer the domain of ultra-cool boutiques, these eccentric, increasingly niche clothes are flooding the likes of Marks & Spencer, Gap, Burton and Next.

There can be no question that menswear retailing is booming, but just how far store interiors have been affected by this newly emerging mindset, fuelled by celebrity culture and a David Beckham-esque mentality of blinging it up with brands, is only now becoming clear.

A repositioning in fashion lines is throwing up strategic-led redesigns across the board as leading UK retail giants collaborate with designers in a bid to lure this fashion-savvy male.

For example, Gap UK is planning a major brand positioning project and is understood to have appointed brand strategy consultancy Eat Big Fish (DW 16 June). Exactly how this will affect its menswear range is not yet clear. New Look is looking to bolster its menswear range and has been working with Naked, Odd and NB Studio on a series of projects to boost brand awareness.

Burton has been undertaking extensive research, integrating a series of focus groups to support the project. The concept store will be less of a building and more of an articulated mentality, a testimony to the male shopping psyche.

Burton does not usually work with external design groups, but will enlist the help of a consultancy, appointed from a two-way shortlist, within the next three weeks to collaborate with its in-house team.

‘It is quite unusual for us to invite someone in, but it will allow us to look at the picture from the outside, offering a new skills base. You can be too close to the brand sometimes,’ says Burton creative director Stephen Hall.

Burton’s opportunities to evolve the brand are vast. Mintel senior retail analyst Neil Mason suggests a possible repositioning to ‘extend Burton’s reach to a 30-plus target audience. Such a move would mean changing its image to ensure that it has a broader appeal.’

Jason Griffiths, head of marketing at Topman, believes men show a more ‘individualist, less tribal attitude’ when shopping. ‘The pace has been upped a level, there is a greater demand for unique pieces, fast fashion. Men’s behaviour is similar to women’s,’ he adds.

However, retail projects can be as fickle as fashion itself and are often vulnerable to a changing economic climate. ‘Menswear is usually one of the first sectors to feel the pinch in a retail downturn,’ says Nick Bubb, an analyst at Equity Research.

Burton hopes to have its first prototypes ready before Christmas. If the designs can match its ambition, the concept store is likely to be radical from the start.

A Cannes for geeks