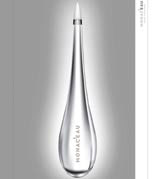 A luxury bottle emulating the shape of an elongated water droplet has scooped first place in the UK round of the Monaco Luxe Pack Design Awards.

The design, the brainchild of Glasgow School of Art graduate Lewis Macintyre, will go on to compete in the international final of the awards, held in Monaco in November.

Seven finalists were tasked with designing a 750ml luxury bottle of water with a ‘celebration in Monaco’ theme. The brief stipulated that the bottle had to be feasible to manufacture and should include a closing system, finish, brand name and identity.

For his design, Macintyre studied the sculptural qualities of water in motion and came up with a bottle designed in the shape of an elongated water droplet.

The graceful lines of the product and its air of luxury is intended to represent Monaco and its people.

Unusually, the bottle does not have a base, so it must be suspended by its specially designed cap, or held in ice or in a crafted bar or table-top display. The brand name adds another twist, as the ‘O’ of Monaco has been replaced with the French word for water, ‘eau’, resulting in Monac’eau. Close scrutiny reveals that the apostrophe has been replaced with a graphic representation of the bottle.

Lewis picks up â‚¬2000 (£1380) to develop a model of his design, plus a trip to Monaco for the international final, where he will compete with designs from the seven other participating countries: Brazil, France, Germany, Italy, Japan, Spain and the US.

Jonathan Ford, chairman of the judging panel and creative partner at Pearlfisher, says the judges were impressed with the diversity of design ideas on what was a paradoxical brief: how to turn a commodity, water, into a luxury.

According to Ford, ‘The winning design dealt with this paradox in an interesting, visually striking way. It was a beautiful design that was graceful in its pure form and its display potential, and showed creatively how packaging can be used not just in isolation, but as theatre, to create enormous desire.’ The immediate challenge for the competition is to broaden its entry base and continue to gain in credibility, Ford adds.

Ben Cox, staff designer at Sieberthead, was a highly commended finalist in the Luxe Pack Awards for his MonacoWater design.

Cox says: ‘I felt this design would encapsulate the moment of celebration in a witty way. It was also a good platform for doing something clever with the graphics, which mirror the rotational quality of the bottle. I wanted to create a strong and iconic shape, and merging the champagne and bottle and flute was something I hadn’t seen before.’

Another finalist, John Hughes, staff designer at Identica, entered a design entitled, ‘Pour: a bottle designed for rinsing the sand from your feet after a day at the beach’.

The bottle takes the form of an elegant glass water jug – its simple graphic motif adding to the understated glamour of the product.

Hughes says: ‘I wanted to look at the brief differently from anyone else and thought that washing your feet was one of the most luxurious thing you can do with water. It was completely tongue-in-cheek and great fun to work on.’

Launched in 1988, Luxe Pack is an international trade fair dedicated to the design and packaging of luxury products. The international winner for the 2005 competition stands to gain â‚¬10 000 (£6890), plus the Monaco Luxe Pack Design Awards trophy.