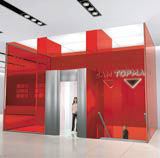 Topman, the Arcadia-owned menswear retailer, has revealed plans for a series of stand-alone brand extension stores.

The outlets are to be branded Topman, but will only sell specialised fashion lines. Possible variations include denim and suit stores. The retail designs are likely to be developed in-house and will be based on a ‘completely different concept’ than the existing Topman outlets.

The initiative is a ‘long-term goal’ for Topman, says marketing director Jason Griffiths.

The announcement comes as the retailer undertakes an ambitious growth strategy and five-year plan to launch a series of ‘evolution’ stores, trialling innovative retail and interior designs. The successful elements will filter down across Topman’s portfolio of 185 UK stores to help modernise the chain.

Topman has earmarked up to 30 evolution stores, which it hopes to open over the next three years. The first opened in Glasgow in March.

‘These evolution stores are like test tubes; we will test new window installations, in-store concepts and designs in general. New concepts will push the boundaries and create points of difference across Topman,’ says Griffiths.

Topman is planning to launch its first evolution flagship store in Nottingham at the Victoria shopping centre in October.

There will be a variety of materials used on the shop floor, such as concrete, wood and copper, to distinguish distinct product destination areas. The store will also feature a lift shaft and stairwell back-lit with coloured glass.

The Topman in-house design team has collaborated with Tom Dixon Design, Twentytwentyone and Zebra on the project.

Another Nottingham-based store is scheduled to open in 2008, and an evolution store will launch in Manchester next April.

Topman is also in the throes of evolving its product labelling and ticketing in a bid to ‘create more personality’ across the brand. Different typography will brand up to five ranges of separate fashion co-ordinates. Leather garments will have a retro feel, while casual clothes will be more sporty.

The project will be completed by September and has been led by Topman’s in-house team.

Plus emerging graphic and art talent: ‘We love to work with graduate designers on a project basis,’ says creative manager James Thomas.