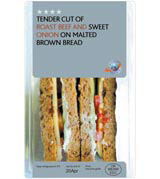 World News, the airport retailer owned by Alpha Group, is launching its first 40-strong range of own-branded food products, as it embarks on a growth strategy to enter new markets.

Aricot Vert has been appointed to design the identity and packaging for a host of new ‘food on the go’ products, including a three-strong range of sandwiches, child-friendly snacks, salad pots, desserts and cakes.

The design is ‘pared down’ and uses a simple, direct graphic, explains Aricot Vert creative director Keren House. The circular, three-dimensional logo acts as a quality endorsement. The packaging has been developed so an in-house team can tweak it as the range evolves over time.

Aricot Vert is also tasked with designing material to support a ‘News Bites’ meal deal and is developing in-store point-of-sale items. The products will launch across World News stores in September.

World News used to stock food produced by third-party suppliers, but growing customer demand has given the company a new direction.

World News has airport retail outlets only, but is looking to expand into areas such as travel retailing – including motorway services, coach and railway stations – plus retail sites at hospitals, office complexes and out-of-town retail parks.

A cult above the rest