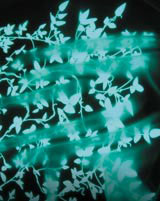 Wingfield was picked as a finalist for the Oxo/ Peugeot Design Awards last year, for Light Sleeper – which was also named Best New Invention 2003 by Tomorrow’s World. It was also exhibited at Orange’s House of the Future installation, which showcased experimental, ‘smart’ products. ‘When I visited, I was struck by how noisy the technology there was – another clichÃ©d aspect of futuristic technology. I wanted to create something more subtle.’

Wingfield’s brand of technology, which emulates natural phenomena, is a form of biomimetics. ‘It’s the field of technology inspired by nature,’ she says. ‘A good example is Velcro, inspired by its inventor’s observation of how the hooks on burrs allow them to attach themselves to each other.’ Along with biomimetics, Wingfield has a passion for eco design – and electroluminescence looks set to play a major part. ‘It will soon replace conventional light bulbs as it’s more energy-efficient and eco [friendly].’

Last year, with designer Nick Thompson, she co-founded Loop, a company that marries reactive, luminous surfaces with traditional objects. They soon came up with Digital Dawn, a blind-cum-lamp incorporating ambient lighting that glows brighter when the space around it becomes darker. Commissioned by Future Physical, a company that funds pioneering digital work, it was shortlisted last year for the RCA’s Helen Hamlyn Awards and nominated in another award this year.

Wingfield now plans to explore other forms of equally eco luminous surfaces – photovoltaics, photochromatic inks that glow in response to light and thermochromatic inks whose colours alter according to changing temperatures. She’s developing a flock wallpaper, called The Walls Have Ears, that illuminates when it detects sound: ‘I like the idea of combining a conventional William Morris-style wallpaper with electroluminescent technology.’

This Christmas, Digital Dawn goes on show at London furniture outlet Rabih Hage, as part of Let There Be Light, an event organised by several shops in Brompton Cross. This will showcase the work of cutting-edge designers who’ve been invited to put a fresh slant on a traditionally cheesy institution – Christmas lights. (The designs can be bought by putting in a silent bid; proceeds go to charity Shelter.) Wingfield is also taking part in the Victoria and Albert Museum’s lighting show Brilliance, which starts in February.

Above all, Wingfield is determined not to blind people with science. ‘I hate the elitist side of design. I don’t want my work to go over the heads of older generations. There’s a huge technology boom going on, but swathes of the population are unable to engage in it.’

Let There Be Light runs until 22 December in the Brompton Cross area. To bid for any of the designs, log on to www.shelter.org.uk/light