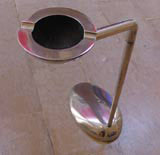 Alsop Architects is planning to branch out into homewares, with an as yet unnamed furniture-to-accessories-led range expected to launch in April.

The range will build on a series of products developed for the Valencia Biennial 2003, including the Scribble Sofa, Single Smoke Ashtray (right) and Whiskey Table.

‘[The products at Valencia] are not quite in the form in which we’re going to reproduce them for [the public],’ a spokesman for the architect explains. ‘They’re subject to a bit of revision and expansion before we release them as marketable items.’

The range will officially launch in the Dutch town Almere, for which Alsop this year redeveloped the town centre according to a Rem Koolhaas masterplan.

It will later be represented at the Milan Furniture Fair and 100% Design.

Alsop has not yet made ‘firm arrangements’ with any retailers for the launch or sale of the range, he adds. This is the latest venture for a group that has never seen itself as ‘being confined to architecture’.

Earlier this year, Alsop produced an interlocking tea and coffee set for Alessi.