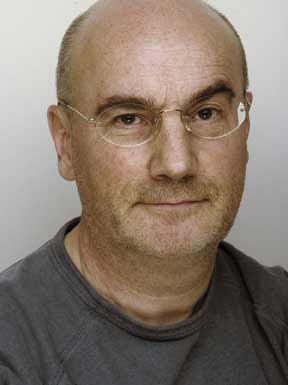 Writing a monthly column about a subject I love – the world of design – is normally a joy. Designers tend to be opinionated sods and I’m no different. And so for me it’s a privilege to have a soapbox to do my yakking from.

Yet writing a regular column is not without its dark moments of self-doubt. Does anyone read what I write? Would anyone notice if it wasn’t here?

But even worse than occasional fits of angst-filled introspection are those bleak moments when I sit down to write my 500 words and find that I’ve got nothing to say. It doesn’t happen very often, but sometimes the laptop screen stares back at me with intimidating blankness. Today is a blank day. Jerry Seinfeld famously made a TV show about nothing. Can I write a column about nothing? Probably not a good idea.

It isn’t even a case of having nothing to say; it’s just the daunting realisation that this column will appear in the first week of January – a period of almost universal gloom – when no one wants to read earnest observations on the current state of pitching, or listen to moans about the prevalence of bad kerning in TV graphics, or any of the other hot professional issues I might choose to sound off about.

In fact, my plan was to have a self-righteous moan about the hideousness of Christmas. I’m not talking about the crowds in the shops, the traffic on the roads, or the panic to make sure you’ve got Auntie Mavis the sweet sherry she likes. I’m talking about the sheer awfulness of the design of Christmas: the hideous decorations that appear everywhere like a virulent rash, the brain-dead advertising and that sinister, red-clad gentleman who breaks into children’s bedrooms in the middle of the night. Why is it all so ghastly?

But who gives a fallen pine-needle about Christmas in January? And anyway, if people want to embrace the sheer vulgarity of Christmas then they should be free to do so without haughty disapproval from design luvvies like me.

So, I’ll pass over the aesthetic horror of the festive season, and mention instead something I saw the other day, which made me think that Britain is still in the Design Dark Ages. My teenage daughter has just received her provisional driving license. It’s a landmark in her young life and she showed me the credit-card-sized licence with obvious pleasure. If you haven’t seen one, prepare to be shocked. The typography is woeful and the layout is – well, it’s such a sad-sack jumble it doesn’t even qualify for the term layout. The card has, inexplicably, two photographs of my daughter: one large, one small. The larger of the two is a fairly faithful reproduction, while the second is a washed-out approximation, as if her head is emerging from a thick mist. There is probably a security reason for this, but the effect is laughable. It looks like a mistake. To be blunt, it’s the ugliest, flimsiest and most forgettable piece of official design I’ve ever seen.

Does this matter? Well, if good design matters, then yes, it matters. This is an item of real personal and official importance. It’s both a significant piece of identification and a passport to an adult world with huge responsibilities. You wouldn’t guess any of this from the card’s design, though. It looks like something someone knocked up on a photocopier after the office Christmas party. It’s that bad.