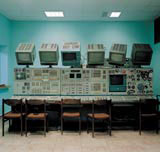 Photographic team Adam Broomberg and Oliver Chanarin unveil their latest exhibition at the Verytrolleygallery in East London’s Reedchurch Street this week. Titled Star City, the show documents the legacy of the Soviet Union’s pivotal ‘space race’ centre of the same name, which is situated on the outskirts of Moscow. During the 1960s, Star City housed the creators and executors of Russia’s space programme. The exhibition looks at the remnants of this era, in which Russia at one point led the space race, and at the lives of those still living at Star City, today an unwitting museum to its former glory. Space City runs from 5 March to 3 April.