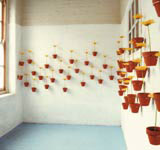 Have you ever burnt your fingers handing someone else a steaming mug of tea, dreamt of the perfectly-folded shirt or wished a bench in an art gallery was better equipped to let you sketch rather than just absorb? To these, and some other common dilemmas, you could do worse than turn to Electric Wig for answers.

Electric Wig has a small studio in one of the few remaining unconverted warehouses on the edge of Manchester’s city centre. It’s a slightly ramshackle environment that only serves to highlight the charm, wit and occasional touch of whimsy inherent in the group’s eclectic product range, which includes items as diverse as a crocheted lampshade, an embroidered flat-pack bedside table and the two-handled Hot Mug.

Executed with sophistication, the products offer a breath of fresh air among the predominantly sleek lines and urban bleakness inherent in so much contemporary design.

The group comprises duo Tim Denton and Johanna Van Daalen, who met while studying for a BA in Contemporary Furniture Design at Buckinghamshire Chiltern University and are together today ‘because of a shared idea of what design means’, says Denton.

On completing their degrees, the pair spent two years at Everton Hope University as part of a Crafts Council residency grant, which finished in December. This month they’ve made the move from Liverpool to Manchester, setting up a studio in the city’s Hotspur Press building.

It would be wrong to let the idiosyncratic touches in the group’s work give the impression of a lack of diligence. Although still in their 20s, Denton and Van Daalen have a decidedly rigorous thinking behind the work they deliver.

Unlike many designer-makers, the group works across many disciplines, including furniture, ceramics, fashion and exhibition design. More interested in the ‘idea behind the design’ than the medium itself, its products are focused on functionality.

‘We’re not into styling and [consider ourselves] anti-consumerism. We can’t see the point of producing products that aren’t needed. We want practical reasons to make something,’ says Denton.

Their design ethos revolves around ‘everyday rituals and the involvement people have with objects’, adds Van Daalen. ‘It’s about how people use things rather than colour or style,’ she explains. The Hot Mug, says Denton, best represents the group’s ethos. ‘It works on every level. People understand why it’s designed that way and use it in the way it was meant.’

This solid creative thinking is matched by some hard-headed business acumen. Electric Wig recently turned down an offer from Habitat for its Crochet lampshade because the company would not name the group as the designer, a commercial decision that many larger groups might not have had the courage to make or the self-belief to implement.

But the duo is still interested in collaborating with other companies and Van Daalen plucks Ikea from a long wish list.

‘[Ikea] gives a twist and angle to what it does and it’s not elitist,’ she explains. ‘It would be a challenge to work within the company’s [cost and manufacturing] restraints and still create something interesting.’

Creating an ‘approachable, mass-produced product with human aspects’ remains an ambition, says Van Daalen, but the pair are rigorous about working with companies that share their commitment to detail. Denton cites the crochet shade, which is starched with sugar, as an example. ‘Sugar is a traditional, simple method and is environment-friendly. It’s also part of the charm of the product. If a manufacturer were to use resin instead, it would be awful,’ he says.

Although they’ve always been a team, Denton and Van Daalen admit that working as a couple can be difficult. ‘It’s hard to know when to switch off,’ says Denton. Both agree they would like to work as individuals on projects and the first evidence of this is a project by Crafts Space Touring, called Designing for Access that launches in the summer.

The project involves five designers, each working with two ten- to 15-year-old disabled children. Four teams are creating products and the fifth, headed by Denton, will design the touring exhibition. It’s interesting, they say, to be ‘seen as individual designers rather than a unit’.

Last month they took the children to Selfridges in Birmingham, in search of inspiration. Looking at design-led products through children’s eyes gave ‘an interesting perspective’, says Van Daalen. She was surprised when one girl described a Le Corbusier lounge as ‘minging’.

‘The kids were interested in textures and colours, the visual and sensory elements of an object and how it meets their needs,’ she explains. ‘It brought home the importance of inclusivity in design – thinking about all the users of your products and designing for access.’

Electric Wig is busy on a number of other ventures. It recently collaborated with Muji and next month hosts an exhibition in Japan, as part of a relationship with Japanese manufacturer Trico. It is also one of eight ‘lead’ participants at Design Front 04 and has been commissioned to create a boat seat, which will be on show around Southend during June.

But Van Daalen asserts that the group is ‘slowing down, being more selective’ in its projects – she and Denton are deliberately taking time out for inspiration. If this is slowing down, look forward to a frenzy of work when Electric Wig moves back up to full speed.