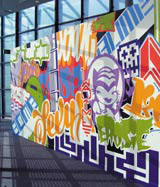 Urbis rises from the Manchester streets like the transparent bow of a giant oil tanker, it’s prow buried deep in the concrete of the square. Its silent beauty conveys a sense of calm, which is quickly dispelled once you walk inside. The half term crowd are jostling for tickets, children and teenagers mingling noisily with earnest Peter Saville fans and Factory Record aficionados.

Urbis creative director Scott Burnham seems unfazed by the clamour. Wearing a black suit with fat pink pinstripes, he is measured and calm in his greeting and begins enthusing about his role, the organisation and the temporary Peter Saville exhibition that has recently opened, during the short walk to his office.

Burnham has been at Urbis for less than a year, but during that time he has made some big changes. The second, third and fourth floors retain their permanent exhibitions, but a first floor of permanent exhibits has been removed to make room for temporary shows and part of the ground floor has been commandeered for the same purpose.

He has also instituted a programme of events, such as this month’s Saville show and an Ink Tank showcase, as part of his drive to make Urbis a ‘more repeatable experience’.

‘When I arrived Urbis was a static visitor attraction with four floors of exhibits, all observing the city from a spectator viewpoint. It’s our duty to engage people and be more dynamic,’ he says.

Burnham is also driving a re-evaluation of the Urbis brand and is in talks with ‘about eight’ groups to find a suitable branding consultancy. He pulls me up on my use of the word museum.

‘Our brand is one of a kind,’ he asserts. ‘I’ve made sure we never use the word museum, the working title at the moment is centre for urban culture.’

On the graphics side, the organisation works with Manchester studio Via. Creative director Trevor Johnson was responsible for creating its identity and still oversees graphics work at Urbis.

But on the exhibition design front Burnham is less satisfied. He’s critical of the discipline for ‘displaying information rather than engaging with ideas’.

‘There’s a real design challenge here – how can we communicate the constantly shifting urban condition?’ he says. ‘The top three floors need more dynamic content to help people feel that, rather than observing, they are actively engaged. I haven’t seen [any groups] who can pull that off on a permanent scale.’

Burnham says he is inspired by work that ‘uses the city itself, appropriating its visual language and using that as a tool to tie in the [installations] with the everyday experience’. ‘There’s a cultural shift in our relationship with the city,’ he asserts. ‘We don’t feel swallowed up by the city anymore. We’re taking control by understanding and appreciating the urban environment and getting what we want from it. Urbis needs to track and drive that shift.’

To Burnham, the urban environment is ‘a dynamic playground’, a gallery space in itself. One project he has introduced is book crossing, where books are ‘released’ into the city for people to read and then, in turn left for someone else. Burnham calls it ‘a project that animates the city, but doesn’t exist inside Urbis at all’.

He has also commissioned Saville to create a series of eight billboards showcasing his source material, ‘projecting moments of inspiration and sharing them with the city’, Burnham explains. ‘Urbis can’t work exclusively inside a space. We need to meet people in their own territory. At least once per year people should feel Urbis outside too,’ he says.

He acknowledges criticism from some quarters that the building is stronger than its contents, and says his team is ‘working hard to change that around’.

‘We aim to ensure Urbis’s cultural impact matches the architectural impact of the building. In 20 years’ time 75 per cent of the world will live in an urban environment. I want to see Urbis at the forefront of that exploration,’ he states.

Burnham is prone to grand statements and has lofty ambitions. Urbis is ‘the only institution in the world with a remit to explore the urban environment’, he says, adding that it is his ambition to make Urbis a world class attraction, rivalling the Pompidou centre in Paris in terms of global renown.

He has spent eight years in Britain and admits that initially it was simply the lure of the job that brought him to Manchester. But, he insists he has ‘fallen in love’ with the city.

He’s cagey about other aspects of his life and maintains the job is his main focus. That dedication, combined with some serious ambition, should make Urbis a space to watch.