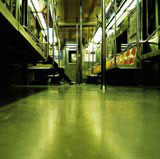 Many of us dream of leaving our jobs – even those of us with jobs that impress people when you tell them what you do at parties. But for some people, starting afresh is a reality.

Take Iain Crockart, who has become a photographer having been a creative director at CDT Design. Crockart had been a designer since graduating from London College of Printing in 1987. At CDT, he rose through the ranks to become a senior creative partner with a car, private medical insurance, bonuses and shares. But a few years ago he realised that he wasn’t doing what he was taught to do and had a nagging feeling that he should fulfil his ambition of becoming a photographer by the time he was 40.

‘It was the loss of creativity,’ Crockart says. ‘In college they train you to be a designer not a manager. I’d become a manager, and I’d stopped doing hands-on work.’ This had left him feeling ‘frustrated: like a driver who wasn’t able to drive’. So Crockart left in December 2002, at the age of 37.

As he says, ‘Anyone can call themselves a photographer.’ But he had a bit of a professional head start. First, he’d used a lot of his own photography in his degree and had continued taking photographs as a hobby. Then, as an art director, he’d commissioned photography. Impressively, his first job as a reborn snapper was a big shoot for O2 with Lambie-Nairn: ‘There were loads of people there and I thought, ‘This is serious. Then I started work and it was as if I’d been a photographer for years.’

Was it difficult to find work? ‘I go and show my book like anyone. With the first job, the art director said that he thought I had an eye, which I was very pleased about.’ Being on the other side does pose challenges, however. ‘As an art director, if you need a photographer to take a picture of a mushroom, you find a photographer who has already shot mushrooms. I’d like to think that I can get past that typecasting, because of my experience.’

Crockart is confident – mainly because his years as a designer have taught him what designers and art directors want. ‘There’s a comfort factor [with clients] – they think they don’t have to use an art director as I’ve been one,’ he says.

Crucially, he sees a picture in the context of its destination. ‘I crop in camera,’ he says. ‘It’s usually composed through my viewfinder.’ This is not necessarily what photographers do. ‘Often it infuriates art directors when a photographer sends in their work and they’ve ignored certain key factors, he says. ‘I’m not going to forget about the brand colours, or where the logo goes. His pictures, as seen on his website, are, as he says, ‘graphic. I think designers understand them.’

Crockart’s photographs are also sold through Forwalls, a site for selling photographs specifically for interiors, a growing market that has also attracted Leeds designer-turned-photographer Adam Lloyd. He has started his own on-line gallery called artworksinside.com, which produces work for commercial and domestic interiors by graphic designers, illustrators and photographers. It’s a bespoke service, whereby your artwork of choice can be changed in colour and design – for instance, if your sofa is blue, and you want an image to match it, then Lloyd will manipulate it in Photoshop accordingly.

The business was set up by Lloyd after having been a graphic designer. ‘I’ve been a designer for about ten years,’ says Lloyd. ‘I went freelance about three years ago, to set up the website.’ He’d done a graphics HND in Birmingham and took photographs at college. ‘I always wanted to take up photography again.’

Instead, Lloyd became a graphic designer at Poulter Partners in Leeds, and did that until he left three years ago.

‘I’ve always been really interested in photography and interior design,’ says Lloyd. ‘When I was at Poulter Partners I commissioned a great deal of photography and found myself getting more and more involved. In fact, I’d be doing almost everything apart from pressing the shutter. It’s not so much of a change for an art director to become a photographer.’ He left to set up the business, helped along by freelance design work.

Lloyd’s site is ‘like an image library’, divided up into categories: Retro, Urban, Abstract and Organic, with a special category for New York, where Lloyd has just been on a photography trip. Some of the images are old slides that have been subsequently tweaked by Lloyd. ‘As a designer you collect a lot of printed ephemera, he says. ‘It leads you into working with a kind of photographic illustration.’

The site offers a framing service, and Lloyd is talking to a large developer with the aim of ramping up the contract side of the business. ‘At the moment it’s about 50/50 corporate and domestic, with a lot of restaurants, bars and clubs,’ he says.

The site went live in December and is attracting sales. Lloyd has just completed a commission for the Comedy Store in Leeds, and works with a friend and colleague who also worked at Poulter Partners, Biff Worsley.

According to Nick Veasey of photolibrary Untitled Photographers, ‘You find that quite a lot of designers are photographers as well’. Veasey, a former marketing director at a graphic design group, adds, ‘It’s common for people to be interested in both disciplines, so it’s unsurprising that people cross over.’

A case in point is Lee Funnell, well known as a photographer of seven years’ standing, who started as a designer and now shoots extensively for the graphic design industry. ‘I haven’t been a graphic designer for some time,’ says Funnell. ‘But I understand the graphics industry well, because of my past.’

Funnell started by doing a degree in visual communication at Ravensbourne, then worked as a designer for about a year at design consultancy Williams and Phoa before becoming a photographer in her own right in 1997. Funnell now takes a range of photographs, many of which are for the corporate brochure market, and you can pick out a strong sense of line and shape in her work that is influenced by a graphic sensibility.

Although she is entirely clear that she is solely a photographer, Funnell says that her experience as a designer has helped her towards a particular way of seeing. ‘I am definitely looking at work from a graphic perspective,’ she says. ‘Although I don’t think you can learn to have an eye, I do think about how the image will be used: whether it’ll be landscape or portrait, or a double-page spread.’

In addition, she thinks of herself as a commercial photographer as opposed to the archetype of an artist who is working autonomously. It’s a different approach to the same art – and frankly, one that arrives at more client-friendly results.