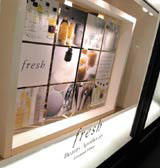 Interiors will be designed by American architect Hacin & Associates in collaboration with Fresh co-founders Lev Glazman and Alina Roytberg, with the design concept executed and interpreted by Umbrella.

The London retail design group recently created the Fresh concessions at Harrods (pictured right) and at Selfridges stores in London and Manchester.

Glazman says the Marylebone shop’s interiors will resemble those at the company’s eight existing stores across the US, France and South Korea, but with a twist. ‘All of our stores have the same identity, but we always introduce new elements,’ he says.

The ‘sleek’ 37m2 space will feature a stone floor laid in the style of hardwood flooring, Corian surfaces and liberal use of glass, steel and ‘clean, grey, finished wood’, says Glazman.

Space will also be allocated on- site for a private treatment room and basement offices, which will house Fresh’s UK headquarters.

Fresh was established in 1991 and offers non-invasive treatments and skin and haircare products derived from historical remedies.

MoÃ«t Hennessy-Louis Vuitton has since 2000 been a key shareholder in the company, which expects to have 12 standalone stores worldwide by 2005.

Glazman says there is potential for additional store openings across the UK, depending on the success of the Marylebone shop.

Fresh’s products have previously been sold through a network of preferred distributors, including Liberty, Selfridges, Harrods and House of Fraser.