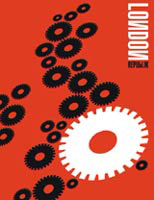 Time Out this week launches the inaugural edition of London Republik, with a cover and teaser campaign designed by Johnson Banks. Group principal Michael Johnson says the magazine explores the notion of the capital as an autonomous entity, ‘separated from the rest of the country’. The artwork depicts London as ‘the egg of the yolk, the only cog, the ladder up in a sea of slippery snakes’. The black and red colour scheme and typeface play on the title and tap into Constructivist Russia, adds Johnson.