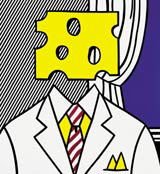 ‘Why Brad darling, this painting is a masterpiece!’ declares the blonde on the canvas. ‘My, soon you’ll have all of New York clamoring for your work!’ The prophecy certainly came true for Roy Lichtenstein, the most graphic of artists.

It can be hard to imagine anything tragic in the world of this American Pop artist, on show at the Hayward Gallery in London. His brash, boyish paintings are as unmistakable as the commercial world from which he drew his subject matter – the world of 1960s America, of kiddies’ comics and naive consumer packaging. The images encapsulate a glossy dream, one that, ironically, has faded into nostalgia.

Bright yellow cheese features heavily in Lichtenstein’s giant pictures. Its cheerful existence requires no explanation. Why should it?

His depictions of people, objects and interior scenes are unmistakably comic in every sense: they could easily be blown up stills from a cartoon strip. They try to be no more than they are, mimicking the plastic, tabloid world around them and enjoying the whole superficial charade.

Lichtenstein briefly embarked on a career as an industrial designer in Ohio, before plundering his profession’s world for his new breed of art. His fascination was with the low ‘art’ of advertising and sign-making, not areas his abstract expressionist predecessors – artists such as Mark Rothko, Willem de Kooning and Jackson Pollock – would probably have had much time for.

Lichtenstein’s work, if controversial, certainly lights up the South Bank’s concrete vastness. And this, the first major UK retrospective of his work for 35 years, demands attention. Though there are some absences (his giant murals for instance), the 80 or so paintings here are a good representation of his work. We have the dashing, subtitled boy-girl scenarios formed of ‘ben-day dots’, as if they have been enlarged straight off the page. Then there are the paintings of a golf ball, a cup of coffee and a washing machine, unimaginatively entitled Golf Ball (1962), Cup of Coffee (1961) and Washing Machine (1961). Even the Cubist reworkings and interior scenes seem to echo his exclamation marks and speech bubbles, preventing you from taking it all too seriously.

It is interesting to see how Lichtenstein used his ‘image duplicator’ – a brilliantly named device for projecting his sketches on to the wall so he could redraw them in a larger scale. He would frequently turn his canvases upside down to work on, in order to retain their balance and proportion, and he toyed with mirrors in a similar way. It annoyed the hell out of the art establishment though – he was even called ‘one of the worst artists in America’ by the New York Times.

It wouldn’t be hard to accept Lichtenstein’s light-hearted world at face value, but there is more to this superficiality than meets the eye. Lichtenstein was not inspired by the world of ordinary objects, fast living and candy colours that he reflected. He said his art was concerned with the ‘most brazen and threatening characteristics of our culture, things we hate but which are also powerful in their impingement on us’.

Like so much great comic work, Lichtenstein’s art is only a pause away from being knowingly tragic. Peel back the canvas, his paintings say, and there is nothing whatsoever underneath.

Roy Lichtenstein is on at the Hayward Gallery, South Bank Centre, Belvedere Road, London SE1, until 16 May