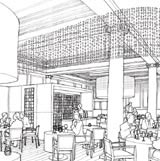 United Designers, the Keith Hobbs-led group behind London hotspots Nobu and The Metropolitan, is creating interiors and the identity for new restaurant Pearl.

The restaurant and bar will be run jointly by head chef Jun Tanaka and head sommelier Michael Davis and opens in May at The Chancery Court Hotel in London’s Holborn.

According to United Designers’ creative director Ian Bayliss, who is creative lead on the project, the brief was to create interiors that is a reflection of Tanaka’s food. The challenge is to make the space’s grand architecture ‘less overbearing’, he says.

‘Because it’s a listed building, it’s very difficult for us to change the interiors, so [the solution] is all about installations,’ Bayliss adds.

Playing on the restaurant’s name and the site’s heritage, United Designers is introducing a ‘curtain’ made up of more than a million hand-strung pearls. Bar seats are ‘pearlescent white leather’, which has also been applied to the walnut bar.

‘It’s quite sexy and feminine. We wanted people to go there [for the experience] itself, not just for pre-dinner drinks,’ Bayliss explains.

The more ‘serious’ restaurant features pearl chandeliers and dark wood floors and dividing screens. Bayliss says Pearl’s typographic marque features an ‘abstracted’ [rendering] of the oyster shell’. Reflecting its ‘organic’, nature, this is adapted for use on the restaurant’s shutters, menus, stationery, matchboxes and napkins.