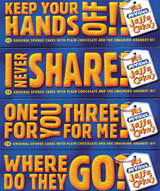 McVitie’s Jaffa Cakes this week unveils the first significant overhaul of its packaging in a decade, designed by Williams Murray Hamm.

The revamped packaging, which is being applied to all of the brand’s cake and biscuit variants, rolls out in stores from this week and will be supported by a £4m marketing campaign overseen by the consultancy.

McVitie’s Jaffa Cakes brand manager Rob Hobart emphasises that the redesign is not a repositioning exercise, but rather an effort to grow sales by harnessing consumers’ affection for the 62-year-old brand.

‘There was a firm belief [internally] that McVitie’s Jaffa Cakes could be an awful lot bigger than it is, because it has a place in the hearts and psyche of the British public.’

Hobart says that he briefed WMH to create packaging that would challenge consumers’ perceptions of the brand, while still remaining ‘true to its heart’, and would make it ‘live and talk’ at point-of-sale.

It was also crucial that the design reinforced the brand’s desired position in the market as ‘the one true Jaffa Cake’, and built on its personality.

This, Hobart says, revolves around the ‘moreishness of the product and the way that it can often drive certain self-centred behaviours’.

Although WMH has retained the packaging’s bright blue background and orange-peel typeface, it has consigned the brand marque to a small, personalised tag in the corner of all packaging.

Its traditional, dominant position has been taken up by a series of expressions – including ‘Just one more’, ‘One for you, three for me’ and ‘This box is empty’ – that aim to reflect the way people act and feel around the brand.

According to WMH director Richard Murray, the group generated more than 70 such catch phrases, which can be switched around to reference particular events or times of year.

‘We wanted to get a bit of entertainment into [McVitie’s Jaffa Cakes] at point-of-sale, because it is a feel-good, fun brand,’ he explains.

‘It also seemed that, since the words ‘jaffa cakes’ aren’t [legally] owned by McVitie’s, it was wrong to concentrate efforts on doing something to that when the real equity was in the consumer love affair with the brand.’

Murray says ‘ring-fencing the brand’ was a top priority: ‘The whole concept of intellectual property is important. What we’re trying to do here is replace a big logo with a big idea that can be owned and nurtured.’

He maintains that this approach will be much harder for supermarkets – many of which offer jaffa cakes in packaging that features similarly ‘wobbly’ typefaces and blue and orange colourways – to replicate.

‘The world has changed, and a lot of smart brands are changing, too. Just look at the MTV logo, or Apple design, or Madonna, even. The core is always the same, but the execution moves around the brand. We wanted something that was different every time [consumers] saw it.

‘We had so many stories and anecdotes [from McVitie’s consumer research] about peculiar behaviour – such as people hiding their Jaffa Cakes – that we wanted to exploit that, really,’ he says.

Hobart estimates that the WMH-designed packaging – and the coinciding marketing campaign – could boost sales of McVitie’s Jaffa Cakes by up to £15m in the medium term.

WMH beat Jones Knowles Ritchie, Design Bridge and Ziggurat to the appointment, which is worth a six-figure fee to the group, following a credentials pitch in the summer of 2002.