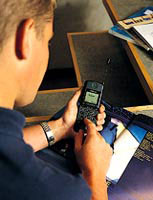 Mobile phone giants Vodafone and One 2 One have appointed new UK branding consultancies in a shake up of the sector.

The Identica Partnership has been appointed by the UK’s largest mobile network Vodafone, and has resigned its role as lead UK consultancy of rival phone group One 2 One as a result.

Its former place as consultancy for One 2 One is soon to be filled by global brand consultancy FutureBrand Worldwide although the ink is not quite dry on the deal.

A spokesman for Vodafone confirms that “we are working with them [The Identica Partnership]”. Exclusivity agreements would not enable it to continue working for both companies.

A spokesman for One 2 One confirms that its long relationship with the Identica partnership has come to an end, although it was not certain who had terminated the arrangement.

“We are in the late stages of discussion with FutureBrand at the moment. The relationship with Identica has ended, although I cannot say how it was terminated,” he says. He adds that the newly appointed consultancy will, for the time being, be working on implementing existing branding, rather than creating any new branding.

Identica is understood to be working alongside Springpoint, which continues to work with Vodafone on overseas projects.

The switch follows the arrival at Vodafone of former One 2 One marketing head Paul Donovan, now Vodafone UK commercial and marketing director.