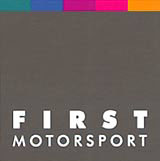 Fingal Design has created the identity for First Motorsport Group, which becomes the umbrella company of an international racing event company.

The parent is formed from the union of three subsidiary companies linked by the First name: First Event Management, First Driver Management and First Event Systems.

First Event Management was established to provide event management services across a wide range of disciplines within motor racing and rallying. Now, together with the more recently formed sister companies, the group has expanded across North America and South East Asia.

“The rapid expansion called for the launch of a mother company to sit on top of the three sub-brands and bring all the elements together under one main brand name,” says First Motorsport Group managing director Andy Moss.

As well as the group logo, Fingal has designed a brochure to introduce the new First Motorsport Group brand, using a graphite theme. This graphite is featured as a solid background, and as duotone images interwoven with four colour images, to create a strong graphic link with the new marque.