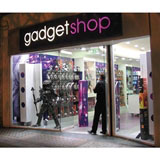 Collapsed gizmo retailer Gadget Shop is plotting a return to the high street under a revitalised brand, a year after it was forced to close all its stores.

After holding pitch presentations with design consultancies last month, the retailer has appointed Cheltenham design group Arthur Steen Horne Adamson to perform an analysis of its brand positioning and develop a relaunch identity. It is expected that the first fruits of the rebrand will be unveiled this summer.

Gadget Shop went into administration in March last year after reportedly amounting debt of about £3m. Initial talks to rescue the company failed, although its name and Internet address were eventually acquired, in May 2005, by toy retailer The Entertainer Group. It was subsequently relaunched as an Internet-only store at www.thegadgetshop.com.

Arthur Steen Horne Adamson will develop the identity via the website initially, before adopting a ‘migrational’ relaunch as a high street retailer, according to consultancy partner Marksteen Adamson.

The positioning work will also take into account changes in the sector/ rival gadget retailers, such as Firebox, did not exist in 1991 when the store was opened by founder Jonathan Elvidge.

‘It was a very passionate brand that was defined by the 1980s, but, once [Elvidge] sold it, it became a bit more “stack ’em high, sell ’em cheap” and lost its way. We are trying to recapture that initial spirit and restore some of the mystery of gadgets. It is a move towards defining what the Gadget Shop should be,’ says Adamson.

Gadget Shop operated 65 stores, all of which had closed by April last year, after the retailer failed to attract interest as a going concern. This resulted in the loss of more than 700 jobs. The business was then relaunched in September 2005 by Stuart Grant – son of The Entertainer Group founder Gary Grant – as an on-line and catalogue-only retailer, with an overhauled product range.

Funding comes from the Gadget Shop business, which is operated separately to The Entertainer. The company has begun to look for suitable sites for its return to the high street.

1991: Founded in Hull by Jonathan Elvidge, who subsequently reduced his stakeholding to 10 per cent

March 2005: Went into administration and failed to secure a buyer, partly because of a legal dispute between shareholders