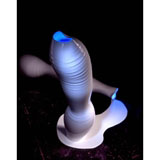 Lighting has become the new rock ‘n’ roll, occupying a space in the misty regions between art design and art. A prime example of this is Paul Cocksedge, who will be showing some 77 limited edition ‘light sculptures’ under the title of Light as Air, an exhibition at Rabih Hage’s showroom in London’s Chelsea. It’s not surprising that many have succumbed to the punning temptation of calling Cocksedge a ‘bright spark’ or ‘rising star’ – a year after graduating from the Royal College of Art in 2002, he got a leg up from Ingo Maurer – in the form of an exhibition with the legendary lighting designer at the Milan Furniture Fair – then won the 2003 Bombay Sapphire prize and was nominated for Designer of the Year the following year. For the new lights, the inspiration came from glass-blowing, but instead of glass they are created by blowing PVC plastic, lending a form reminiscent of pottery and a high-gloss finish. Embedded in each light is a LED that pulsates to project light shapes out of the opening at the top. At least the assembled Range Rovers parked outside will, perhaps, have more than a well-heeled passenger or two to ferry home.

Amazon should stick to what it knows best