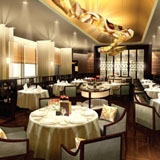 The London Hilton Park Lane Hotel is poised to relaunch its main restaurant as Galvin at Windows, with an interior scheme drawn up by United Designers. The revamp forms part of an ongoing multi-million pound renovation programme at the hotel.

United Designers, which has created high-profile interiors for Nobu London and The Clarence Hotel in Dublin, was approached by the Hilton to redesign the restaurant and bar space six months ago. The space has not been redesigned in more than a decade and was ‘looking tired’, according to Keith Hobbs, chief executive at United Designers.

Formerly known as The Windows, the restaurant and bar will reopen next month with a ‘more glamorous’ interior inspired by the 1930s era. United Designers has created a bronze ceiling sculpture that stretches across the restaurant and bespoke furniture, featuring tables with mirrored reflective tops and different-styled leather seats. A number of design ‘originals’ will also be installed throughout the space, including a Robin Day carpet.

Michael Shepherd, general manager at the London Hilton, states, ‘Over the past three years we have reinvested more than £6m a year on re-developing the hotel and we see Galvin at Windows as an instrumental part of this programme.’

At the same time, Hilton is working with Hunt Hamilton Zuch to overhaul its entire 26th floor to include more suites.