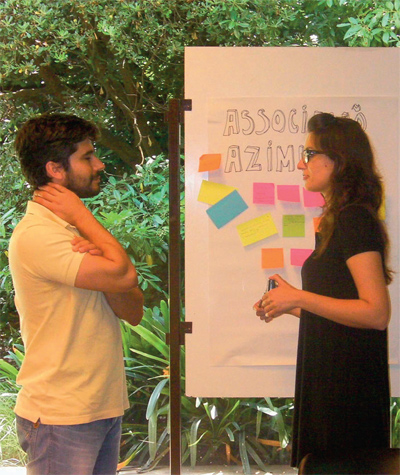 Think Public has been working on 18 co-design projects across the UK and Portugal as part of the Calouste Gulbenkian Foundation’s Inter Generation All programme.

The consultancy was appointed in November 2009 to provide design support for projects in the Portugal-based charity’s initiative, which aims to establish cross-generational relationships to strengthen communities and foster social cohesion (DW 11 March).

Think Public worked with the CGF to select projects for the initiative and to teach the project teams the skills to develop co-design processes and support them. The consultancy will help the projects develop prototyping until the end of 2010, when they should be ready to launch formally.

Ella Britton, design project lead at Think Public, says, ’We wanted people who had an appetite for developing the projects in new ways.’ She adds, ’At the start of the work, part of the project was looking for hidden talent.’

Britton says Think Public developed a targeted Web and e-mail campaign to find projects, as well as using social media. She says, ’We were looking for ideas, as opposed to fully-grown projects’.

A total of 18 projects – 11 in the UK and seven in Portugal – were selected in May. Each project will run for 12-18 months and the majority are starting now and running until autumn 2011.

The selected UK projects are broken down into three areas: loneliness and isolation, migration and environment. Projects include the Connecting Generations scheme for Relationships Scotland Family Mediation South Lanarkshire, which aims to help grandparents and grandchildren connect, and the Future Village project for Action in Rural Sussex and East Sussex Record Office, which aims to engage different generations to create a vision for the village of the future.

The client teams from each project have attended two workshops led by Think Public (pictured), the first looking at co-design and tools for improving user-involvement and the second presenting prototyping techniques for the developmental stages of the projects. At the first workshop the project teams were briefed to test user-engagement interview techniques, which they then presented at the second.

Think Public is now involved in a three-month phase of tailored support for the projects, providing support virtually, over the phone and in person. The aim is for the prototyping stage to finish by the end of the year, at which point Think Public’s role in the project will conclude and the individual initiatives will be fully up and running. An event to celebrate the individual projects is planned for autumn 2011.

Britton says, ’We wanted to make the co-design teaching straightforward and accessible and give the client teams methods of engaging people in effective ways. When they started to consult older people, for example, many brought back insights into the projects they hadn’t expected.’

Details of the projects will be available on the website www.intergenerationall.org, which goes live next week.

Pleased to greet you