With Remembrance Day just over a week away The Royal British Legion has turned once again to preferred design group The Gate to deliver its annual Poppy Appeal campaign.

Attempting to balance consistency with a gradual evolution, The Gate has worked with the charity since 1994, considering ever-changing public perception and allowing pertinent issues or topical armed forces news to inform their design each year.

The Poppy Appeal is one of a number of annual charity events where designers are challenged to update and maintain the relevance of a campaign, while also guarding the charity’s brand values.

This year’s campaign is particularly hard-hitting – partly a result of public desensitisation to graphic images through exposure to war reporting, according to Richard Hayter, executive creative director at The Gate.

’Our audience is used to seeing images of war; they see them every night on the news – maybe in the form of another funeral cortège at Wootton Bassett,’ says Hayter. ’We need to match that in terms of urgency and impact. Three or four years ago, this campaign would have been too upsetting for the public.’

The 2010 campaign has mainly been driven by The Royal British Legion’s decision to address the perception that it only looks after ’old guys in wheelchairs’, according to Hayter, who has translated this concern by using stories of how young service personnel and their families have been affected by recent conflict. 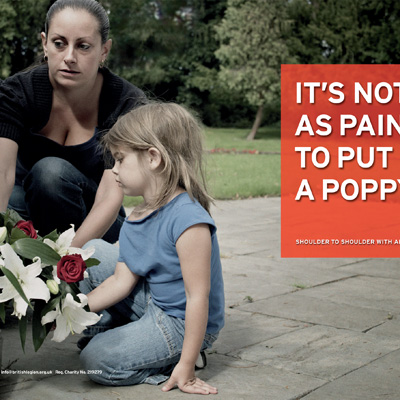 This year, campaign posters include one with the headline It Doesn’t Hurt to Put On a Poppy accompanied by the image of a bloodied soldier receiving medical attention, and another entitled It Only takes a Second To Put On A Poppy with a photograph of a soldier fitting a prosthetic leg.

Although the 2010 posters are a departure from recent campaigns, they are underpinned by ’the same proposition’ says Hayter, who this year put forward six or seven iterative themes, from which three examples have been chosen.

Last year the headline ’For His Sake Wear A Poppy’ ran with the picture of an amputee in uniform in one example. This was preceded by a run of campaigns featuring the ’poppyman’ – a ’symbolic’ soldier designed by – and now phased out by – The Gate. The 2009 campaign helped raise £35m, according to Hayter, who says, ’We always want to beat that, year on year.’

He adds, ’Consistency of brand and stand-out are essential, as these charities are competing for the same money. The client understands that.’
Russell Thompson, director of fundraising and special events at The Royal British Legion, says the campaign appears across up to 7000 poster sites and, as well as encouraging people to wear a poppy, it serves to ’motivate our 300 000 collectors, backing up what they’re doing as volunteers’. He adds, ’This year’s campaign also brings The Royal British Legion bang up to date with what we call “the Afghan generation”.’

Ultimately, Thompson wants The Royal British Legion campaigns to reflect the changing nature of the organisation. ’We did have an image as an older people’s organisation, but we’re spending a lot of money on younger service-people. The Gate is committed to this,’ he explains. 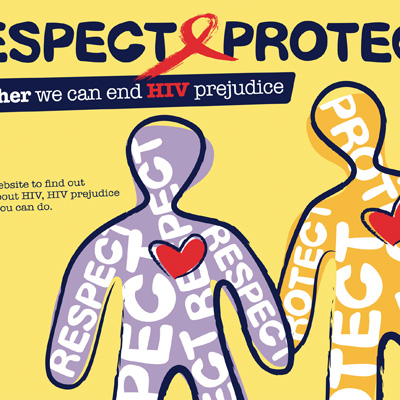 The latest campaign by Shaw & Skerm is now being rolled out ahead of the annual event, which takes place on 1 December. While The Royal British Legion’s evolving campaigns have been rooted in modernising the organisation, Shaw & Skerm looks to communicate two key messages for NAT’s World Aids Day.

NAT trading manager Anthony Townsend says, ’Shaw & Skerm gets what we do and promotes the ideology of NAT. Messages will be based around anti-prejudice, prevention, or both.’

Building up a working relationship over a period of years brings practical benefits, Townsend notes. He says, ’Long term, each year, Shaw & Skerm gets better ideas, the brief time comes down and there’s less time spent rejecting ideas. We have an understanding.’

This year’s campaign is about avoiding stigma and increasing participation – ideas which have been constructed through a graphic of raised hands showing activism and collective involvement, set in vibrant colours, with the headline ’Protect yourself and others against HIV transmission and HIV prejudice.’

A consistency is still intact in consecutive campaigns, though. The 2006 campaign – Shaw & Skerm’s first – was an attempt to distil the charity’s ideology through the slogan ’You Me Us’, which consultancy founding partner Matthew Shaw says ’endorsed and humanised’ NAT’s message and introduced a hands graphic.

The 2007 campaign ran the statement ’HIV – Let’s Get Talking’ against a graphic depiction of silhouetted people and used speech bubbles to present key facts.

A Respect and Protect message in 2008 was designed to convey the message ’our actions and behaviour affect others’, says Shaw. This message was carried over to the 2009 campaign ’but with a very different look’, Shaw says.

’We wouldn’t provide a link every year. The NHS, youth clubs, schools and GPs are all buying into this and the charity needs to sell more materials as it relies on the proceeds,’ says Shaw.

While NAT and The Royal British Legion have faith in their preferred consultancies to understand their needs, Children In Need has turned to a different consultancy every year in recent years.

This year, Initials Marketing designed the Show Your Spots, Let’s Raise Lots campaign, following a 2009 campaign by Premm Design and a 2008 campaign by The Farm.

Children In Need takes place on 19 November and the campaign is already beginning to roll out. It takes its cue from a Fallon-designed rebrand of the organisation in 2007.