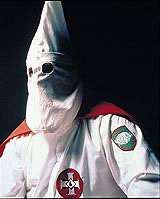 As most of you reading this will know, generating the right kind of publicity can be a bitch. Take the Barbican’s Andres Serrano show, opening today at the centre’s The Curve gallery. Last week Time Out magazine published a feature on the show, mentioning in passing a few pictures that aren’t in the show, but form parts of the series that are. The Sunday Times picked up on the mention of water sports and bestiality and the next day the curator was doing a willy count (including plastic ones) at the behest of the Barbican’s artistic director, who doubtless understands the old adage forewarned is forearmed. And this is one show for which he’d be wise to be well armed.

Older readers might recall the fuss caused by Serrano’s best-remembered piece Piss Christ (1987), a cibachrome print of a miniature Christ on the cross immersed in the New York photographer’s urine. In the US, senators and religious fundamentalists were outraged and the piece led to a public debate about whether the National Endowment for the Arts should be funding ‘obscene’ art. You can’t help but wonder whether such negative publicity impacted on the art scene here; for apart from a Saatchi show ten years ago, this is Serrano’s first UK retrospective, and it proves to be an exhibition of particular relevance to designers.

The show, consisting of around 60 images presented chronologically down the two sides of the broad corridor that form The Curve space, begins deceptively enough. Looking in through the entrance doors you’d be forgiven for thinking that the bold, bright abstracts begun by Serrano in the late 1980s for a New York exhibition on abstract photography are simply geometric homages to 1960s abstract expressionists, but then you see the bald, stark titles; Piss, Milk, Blood, Ejaculate in Trajectory, and begin to realise that the pieces are about something else entirely. Created at a time when bodily fluids moved from the merely taboo to the literally lethal, the pictures captured the zeitgeist of New York’s Aids epidemic more than yards of newsprint could.

And for the next 15 years Serrano uncannily continued to touch nerves, his works offering silent and watchful commentary on religion (in the series The Church) in meltdown, on death (in the series The Morgue) when our fear of it is greater than it’s ever been, and on sex (in the History of Sex) as attitudes to and legislation around sex and the body grow more repressive and hysterical. Examples from all these series are here, along with representatives from others; Nomads, The Unborn, The Klansmen and Budapest, and together they present a body of work that is electrifying in its political impact.

Detractors might argue that Serrano takes the organic, the dispossessed and the powerless and repackages them as cynically exploitative supersleek glossy cibachromes, but his work is undeniably underpinned by thought, the photos provoke and demand responses from their audience, as should all good design.

And they will teach you a thing or two about packaging and presentation too.