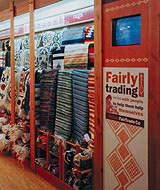 Bisset Adams’ appointment last week by Help the Aged to revamp its retail proposition is the latest example of charities using their high street presence as a brand communications tool.

Oxfam is something of a past master, given its long history of investment in interiors and in-store marketing. Indeed, it was part of Bisset Adams’ brief to ‘bring Help the Aged in line with Oxfam’ (DW 27 September).

However, most charities are not so sophisticated and their shops need to work harder to be more effective as a means of communication.

Commercial think tank Future Foundation’s latest statistics show 46 per cent of people have not visited a charity shop in the past 12 months. Charity shops are ‘their own worst enemies’, says Future Foundation head of not for profit Joe Saxton, who suggests they need to do much more to differentiate themselves.

‘When people shop in supermarkets, they know which shop they are in. I am not convinced people are as aware of the difference between individual different charity shops,’ Saxton says.

Bisset Adams’ task is to achieve a stronger edge for Help the Aged ‘to communicate the charity’s message, and change people’s perceptions of it’, says head of 2D department Dan Barber.

Strong visual branding in-store is one way of hammering home the message, but there are more subtle ways of achieving this aim, says Barber.

Four Help the Aged ‘test stores’ have been revamped in-house over the past three months, incorporating new flooring, colourways and lighting. This is to distance itself from the ‘dowdy, dirty mantle’ often associated with charity shops, says head of retail trading Steve Wooldridge.

Bisset Adams will be looking at the success of these stores as part of Help the Aged’s image revamp being undertaken by Appetite.

Appetite is ‘strengthening’ the corporate identity, which is likely to be incorporated on to carrier bags, windows and leaflets in-store to provide clearer evidence of how the charity works, says Wooldridge. Developments are at an early stage.

e charities, high street shops are one of their core means of communication with customers. But refits come at a price.

‘Lots of people know the charity and its work through its shops alone. As a result, they have become an important way of promoting the brand,’ says business retail manager Jenny Heavingham.

The flagship stores, designed in-house, now feature wooden floors in place of carpet and a ‘clean, fresh feel’, says Heavingham, reminiscent of Habitat rather than a church jumble sale.

‘[Refits] are something we can only afford to do gradually, but we hope to extend it to all our existing 18 stores,’ she says. The shops must be competitive and inviting without sending negative signals to the public about what the trust is spending its money on, Heavingham adds.

‘In most cases, the “product” in charity shops – secondhand clothes, books and bric-a-brac – is usually the same, so they must invest seriously in visual merchandise to create differentiation,’ says Conran Design Group creative director David Chaloner.

Oxfam appointed the consultancy to create an in-store design ‘kit’ in 1999 so it could refit stores without spending money on design each time.

‘High street charity shops are a well-rounded communications device, but the store design must be well thought-out,’ Chaloner says. The shops are mouthpieces through which marketing material such as political slogans and soundbites convey the charity’s work, he adds.

‘Cheaper materials can be used if display units are organised in a way that looks professional,’ says Chaloner.

Some charities have such a distinct proposition that the need for strong brand messages becomes less vital.

The Royal National Lifeboat Institute has a nationwide chain of coastal shops, many of which are housed inside manned lifeboat stations.

It gets its message across via its own-branded goods, which are sold in its shops rather than secondhand clothes, says JHP strategy director Steve Collis. ‘Traditionally, RNLI volunteers sold its products from a tressle table with a biscuit tin,’ he says.

JHP developed display units for the charity’s stores. ‘The shops are a priority [for the RNLI],’ he says.

A handful of charities, notably the National Society for the Prevention of Cruelty to Children and the Royal National Institute for the Blind, have little or no high street presence.

The NSPCC uses a variety of marketing means to communicate its work, including creating high profile campaigns such as Full Stop and working with celebrities such as Ewan McGregor, says head of marketing communications Dugald McDougall.

The charity launched what it claims is the ‘world’s first 24-hour moving poster’ at London’s Waterloo Station last Friday, designed by Saatchi & Saatchi and Swerve Productions.

The RNIB, which has only one UK store in Chelmsford, adopts a similar approach. ‘High streets are becoming saturated with charity shops, which are more effective as fund-raising tools than as brand awareness mechanisms,’ says an RNIB spokeswoman.

Charities need to differentiate their retail spaces or run the risk of leaving shoppers confused and uninterested as to where they are shopping – let alone the ‘why’ behind it. And that could easily hit charities where it hurts: in their coffers.