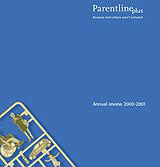 Bluegoose has designed an annual report for charity Parentline Plus, which will be published at the beginning of October.

Bluegoose has worked with the charity over the past 18 months.

The publication features self-assembly kits to illustrate the ‘fragmentation of family life’ and photography mixed with illustrations showing the diversity of modern-day families.

‘The charity’s key message is that all families are different and are made up in different ways,’ says a spokeswoman for Parentline Plus.

The 16-page colour report goes out to potential funders, corporate sponsors and stakeholders, including Government departments and other charities.

The consultancy is also creating the charity’s corporate guidelines, described as housekeeping by the spokeswoman.

Bluegoose has worked on numerous campaigns for the charity including the annual Talking Families initiative, which launched in July. The campaign promotes the need for good communication within families and encourages people to call the charity’s helpline if there is a problem.

Parentline Plus, the result of a merger between the National Stepfamily Association, Parent Network and Parentline UK, was launched in September 1999. It offers support to primary care providers experiencing ‘stress and problems with family life’. The charity’s identity was designed by Synergy.