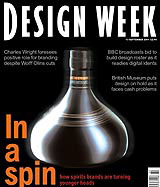 Why aren’t younger people drinking Scotch? Is it because of its traditional image, or don’t they like the taste of it?

Based on an idea by that great brand architect Tom Jago, we designed the Revolve brand and invented the bottle-that-spins to appeal to Scotch drinkers – people rich enough to buy exceptional whisky who could amuse themselves by spinning the bottle like a roulette wheel (the ‘v’ in the middle of Revolve points to the winner). A small, but potentially big margin market.

Coley Porter Bell has removed all ‘whisky values’, taken off the pointer and added stripes. You can’t use the bottle for games any more – you can only twiddle it and watch the funny stripes go round. Of course, before you can play with it you have to buy a whole bottle – which isn’t normal in ‘cutting-edge cocktail bars’.

Does all of this talk of ‘challenging the traditional perceptions of whisky – and the super-premium white spirits market’ mean that all the ‘high-end urban sophisticates’ who don’t like whisky – because it’s too traditional or they don’t like the taste – will now suddenly guzzle it because it might, after all, be a kind of white spirit?

It won’t be that easy. Schmoozing people into liking whisky has been tried before – but so far without any success.

We must admit, nevertheless, that we are jealous of CPB’s skill – it’s team has got more credit for our work than we ever did.