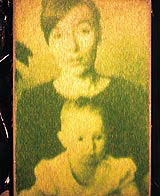 As any casual shopper will know, the market in consumer photographic equipment is heaving. If you want to buy a camera, you will be assailed by shelves of photographic hardware. This technological overload is not only putting us in danger of developing ‘upgrade fatigue’, but arguably blinds us to the inner essence of photography.

It is, therefore, interesting that there has been a bit of a revival in ‘cameraless’ or out-of-the-camera photography: that is, the art of taking a photograph without using a camera at all.

‘It’s the oldest way of making photographs,’ says Greg Hobson, curator at the Bradford National Museum of Photography Film and Television. ‘The very first images were made in that way, by coating art paper with light sensitive chemicals and placing objects on them.’ As the paper was exposed to light, early photographic pioneers found that the image of the object would appear as a silhouette, leading to a rise in popular imagery showing patterned objects such as lace and leaves. As Hobson points out, Anna Atkins’ books of British Ferns used this process to great effect, but it is the work of William Henry Fox Talbot, who promoted his ‘photogenic drawing’ and ‘calotypes’ in the first half of the 19th century, that is the key figure. Talbot describes photography without a camera as, ‘Some account of the Art of Photogenic drawing, or the process by which natural objects may be made to delineate themselves without the aid of the artist’s pencil’.

Cameraless photography was given another boost by the creative innovators of the 1920s and 1930s, such as Man Ray, whose rayographs and solarisations created eerie effects in tune with the surrealist movement. At the same time, Laszlo Moholy-Nagy felt that the word photograms – by now specifically coined to denote images made by placing objects directly on light-sensitive paper – was so crucial to an understanding of the medium that he made it the first lesson on his course at the New Bauhaus (later the Institute of Design) at Chicago in 1937.

Then cameraless photography lost momentum, possibly as the idea of the photograph grew as primarily a journalistic document; the capture of a moment in time. But photography that takes the image-making process beyond the camera is now enjoying a small but significant revival.

‘There is definitely more interest in cameraless photography,’ says Hobson, who curated a show that featured work such as Heavens Embroidered Cloth. ‘Artists seem to be particularly interested in using such techniques. I think it could be to do with a reaction against the rise in sophisticated technology, as it very often suggests a direct relationship and basic interplay between light, object and paper.’

Among the several photographers using cameraless processes today are Daro Montag, Chris Bucklow, Gary Fabian Miller and Adam Fuss – the latter’s Untitled shows a baby floating in water, taken by placing the infant on top of a submerged tray that held photographic paper, then exposing the photographic paper to coloured light. Another, Gary Schneider, made an image of his palm by pressing his hand against film and let the sweat combine with the photographic chemicals.

Some of the most feted contemporary cameraless photographs have been taken by artist and photographer Susan Derges, who has made a series of ‘river prints’, taken at the River Tor near her home in Dartmoor. ‘It’s painting with light: about an interest with light and abstraction,’ says Derges. ‘The orthodox approach would be underwater photography, taking an image with an underwater camera. But this method is not so much an observer of nature, but a part of nature, and it works with the idea of immersion as a metaphor.’

For the river prints, Derges attached photographic paper to aluminium backing and immersed these sheets in a stream at night, then ‘exposed’ all the detail in the river by flashlight, or on occasion, simply the ambient light of the moon and stars: ‘A river by night is like a moving stream of negative film,’ she says. Derges also took prints at the seashore, and the prints show the aquatic life, frogspawn, leaves and sediment at the bottom of the water. ‘In every sense, it is a different take on nature,’ she explains. ‘It interested me to go to this natural place and make these pictures It’s real and tactile,’ says Derges, who has a background in painting. She also enjoys the serendipitous feeling ‘that you are not in total control’ that is part of the process.

Artists Heather Ackroyd and Dan Harvey use cameraless photography and are known for their use of grass in artworks. Ackroyd and Harvey first collaborated 11 years ago, when they took on a project in an abandoned village called Bussana Vecchia in Italy. Called The Other Side, the artists spread grass-seed over a large vaulted interior space, and waited for it to sprout, which it did with unpredictable results. ‘We placed a ladder in the corner of the room where there was directional light,’ says Ackroyd. ‘That’s when we saw that germinating grass could capture a shadow as a pale yellow imprint.’

Since then, Ackroyd and Harvey have made many images from grass. But they don’t like to go into the process they use. ‘We tend not to give a blow-by-blow account as it would make it look like making it was a series of steps, like a recipe,’ says Ackroyd. ‘It often involves growing the grass on a thin clay base, then perhaps using a stencil, or directing projectors at the grass, as if to ‘burn’ an image into the grass. They have made about 25 to 30 of these ‘grass photographs’ this year, and the largest they have made measured several metres across. ‘A large scale works well with the grass photographs, as the larger the image, the higher the resolution,’ says Ackroyd. One of the first artworks they made was Mother and Child – an image of Ackroyd and daughter Adele. The artists currently ‘grow’ their photographs on-site, but are working to slow the ageing process of the grass in order to keep the image for longer and also create a controllable palette of colours.

Another strand of low-tech, out-of-camera photography comes with the camera obscura, which has a very lengthy timespan, going back to the ancient Greeks. By the Renaissance this had become used as the basis for painted images, with Leonardo da Vinci writing of them. Then they became so popular among artists such as Antonio Canaletto, Jan Vermeer and Joshua Reynolds, that Reynolds warned against their indiscriminate use.

Although he is not referring to this history, artist Steven Pippin, shortlisted for the Turner Prize in 1999, recalls this tradition, in that he has turned washing machines, houses – even the toilet of a train – into cameras. For the Turner Prize exhibition Pippin created a launderette with 12 machines, each of which he converted by putting a shutter inside and making the washing cycle an ingenious part of the chemical production of the image.

‘I started as an amateur photographer when I was young, and became very familiar with the technology,’ he says. ‘When I went to art school, I made a camera as basic as possible, just a box with a hole.’ He then found that he wanted to link his homemade cameras to relevant subjects, and subsequently made a series of photographic works whereby a fridge became a camera photographing the food within. Then, in a similar spirit, he made a wardrobe that took a photograph of the clothes inside. Pippin, who appears to be interested in the inner life of technological artefacts, is currently developing a camera that will be its own subject matter and a television that stands as a ‘model for a solar system’. Both are currently in production.

Pippin’s experiments not only prove that almost anything can become a camera, but also contradicts the idea that photography is assisted by technology. ‘I equate the saturation of photography with the absence of interesting events to photograph,’ he says, adding that more equipment, in evermore precise technological formats, has not led to more enlightened photography. At the very least, out-of-camera photographers are showing us different ways of achieving photographic images. At best, they alert us to new ways of looking at the world.

ewart Gardner Museum in Boston, US from 31 October until 31 December. Contact Nicky Childs at Arts Admin on 020 7297 5102. Susan Derges is at Natural Magic at the Museum of the History of Science, Old Ashmolean Building, Broad Street, Oxford from 11 October until 15 December